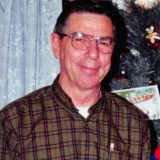 Funeral service for Wesley Bogan, 82, of Sulphur Springs, will be held at 3:00 p.m., Sunday, May 21, 2017 at West Oaks Funeral Home Chapel with David Gibson officiating. Interment will follow at Ridgeway Cemetery with Joe Salinas, Preston Salinas, John Ligo, Paul Krueger, Joseph Mora, and Dalton Kirby serving as pallbearers. Visitation will be held from 2:00 to 3:00 p.m., prior to service. Wesley passed away on Wednesday, May 17, 2017 at Hunt Regional Medical Center in Greenville.

He was born on September 1, 1934 in Idabel, OK, the son of John W. and Essie Mae Bogan. He married Eva Smith in Locksburg, AR in 1959. She survives. Wesley worked at W.O. Bankston Lincoln Mercury for 35 years before retiring to Ridgeway in 1994 where he opened Ridgeway Auto Repair. He was a member of the Commerce Church of Christ. Wes enjoyed camping, fishing, boating, archery, baseball, and anything else outdoors. More than anything else, Wes loved being around his family.