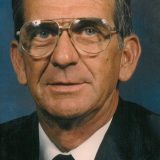 Retired Rains County Sheriff Richard Arnold Wilson, age 71, of Point, passed away Tuesday, May 2, 2017, at Christus Trinity Mother Frances Hospital in Sulphur Springs.
Funeral service is scheduled for Monday, May 8, 2017, 2:00 PM at Emory Church of Christ.  Interment will follow at Hooker Cemetery.  Visitation will be 1 hour prior at 1:00 PM.  Wilson-Orwosky Funeral Home of Emory is in charge of the arrangements.

Mr. Wilson was born August 7, 1945, in Lampasas, to William Henry and Oveada Shelburn Wilson.  He married Linda Harrison in Cleburne on Aug. 7, 1970, same day as his birthday. At the age of 17 years, he began working for ICX Freightlines, where he drove a truck locally, for some 20 years.  His working career was mostly in law enforcement, except for a few years he had a wood burning stove business and a Texaco station in Lone Oak.  He worked some 25 consecutive years in police work in the Mineola and Tawakoni areas.  However, at some point he decided to run for Sheriff of Rains County.  He worked in an elected office as Sheriff of Rains County for four consecutive terms (16 years).  He retired from this position on December 31, 2005.

He loved spending time with his children and grandchildren, telling stories and laughing together.  And, of course, his beloved Linda…his wife and companion for almost 47 years.  His family will miss him dearly.

Preceded in death by: Parents, and 2 infant brothers