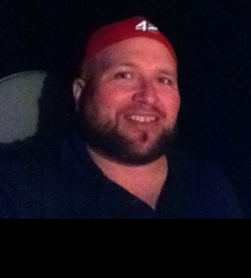 Memorial service for James Clayton “Jimmy” Young will be held Thursday evening, May 4, 2017, 6:00 pm, at Wilson-Orwosky Funeral Home Chapel in Emory.
Jimmy, age 38, of Alba, passed away  Saturday evening, in Canton, during the midst of the horrific tornado that took the lives of some 5 people, Jimmy being one of those. Jimmy was born August 4, 1978, in Carlisle, PA, to James Harold and Linda Kay Morrison Young.He was employed by Oldcastle BuildingEnvelope  as a supervisor.
He was a coach for his nephew’s baseball team the Lone Oak Buffaloes. Jimmy was a showman of milking shorthorn cows. He was a NASCAR, Texas Rangers, and Cowboys fan.
Survivors include:
Sister:  Chris Young Wallace (Rodney)  of Emory
Special Nephew:  Clayton Wallace of Emory
Special Friends:  Danny Mac and Shelley Huddleston of Emory
Aunts:  May Hemminger of Newville, PA; and Sandy Morrison of Carlisle, PA
Uncle:  Robert Morrison of Shippensburg. PA
Numerous other loving family and friends
Preceded in death by:  Parents
Cremation arrangements under the direction of Wilson-Orwosky Funeral Home.