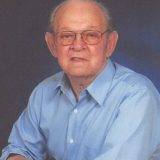 At an early age, he loved to hunt and enjoy his favorite dog Bulger.  After meeting Gloria Don Mobley, he knew she was the one by the way she held his hand just right, so he married her on June 3, 1956, in Dike, Texas.  After 30 years employed at International Harvester, Don retired in 1987.  He was a member of Lake Fork Baptist Church.  His hobbies included fishing and woodworking.

Don was preceded in death by his parents; his brother, Edward Glyn Holt, and grandson, Justin Lee Holt.

Arrangements are under the director of West Oaks Funeral Home.