Approximately 200 citizens of Sulphur Springs arrived early Monday evening at the Hopkins County Civic Center to discuss the Comprehensive Plan for the city. Ian Lockwood of Toole Design Group will lead the four person team that is working with city staff and residents in developing the plan that will replace a 20-year old plan that, according to City Manager Marc Maxwell, is now outdated due to growth in the city. 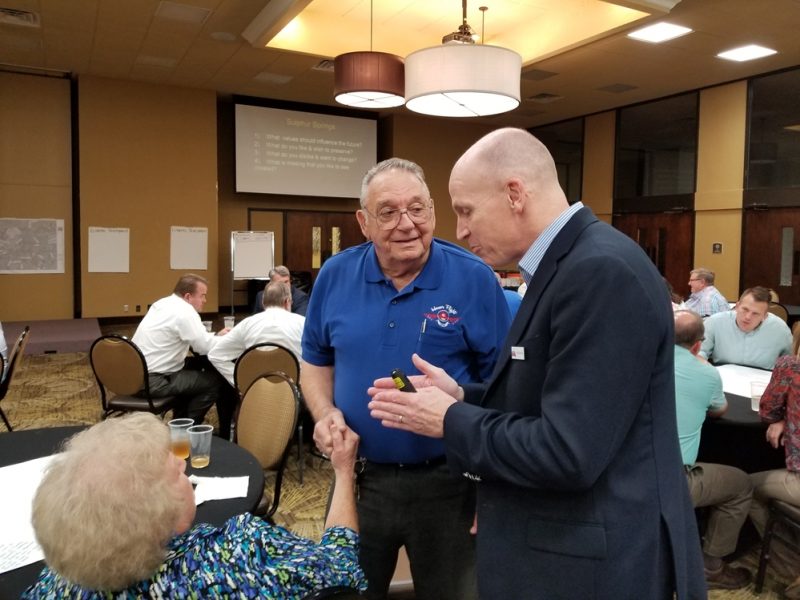 Ian Lockwood, right, discusses Comprehensive Planning with Clayton McGraw, center, and others during Monday night community meeting. Each table recorded their desires for the city during the meeting.

Lockwood, who designed Main Street, Connally Street, and Celebration Plaza, told those present that his team would spend the Tuesday through Thursday gathering information and developing preliminary plans and would later, his target date in July, submit a draft for review and change and then later submit a final Comprehensive Plan.

He stated that there are three things that  were identified for the city—walk-ability, vision, predictability. Walk-ability is in place and expanding. Walk-ability was a key to the development of Main Street, Celebration Plaza and is expanding with the creation of a trail from Coleman Park to Celebration Plaza. He said vision began to happen when the plaza and streets around downtown began to change. He provided pictures of the changes that in some respects were stunning as the look of downtown has changed.

Lockwood also pointed out that other cities in the region are talking about Sulphur Springs and now people from all over the region are visiting the city to eat and shop downtown.

Now the Comprehensive Plan will turn to land use, transportation, and public facilities. He stated that development at the airport, underground utilities and public works, the thermos mine/park area development, frontage roads, Houston School grounds, trail system that is in process, town branch development, and downtown west, a higher density housing plan, are on the table for discussion and implementation. He noted there are areas of the city that are underused such as vacant properties that await infill development.

A survey of citizens prior to the meeting received 600 responses. Lockwood stated that was a higher percentage that most cities receive. He noted that the responses not only looked to development but also stated the desire to retain community values and community context. He said that the top two places to go in the survey were restaurants/bars and churches. Top desires also included providing a variety of housing options, architectural design to complement existing buildings and providing infrastructure that would allow for more bicycle paths and accessibility.

Residents along College Street stated that family and legacy were important. Maintaining and protecting the advances in the downtown area and protecting single family neighborhoods were also important.

For many, signage along streets and entrances to the city and to the downtown area were points of concern. The desire to provide an eye-delighting entrance to improvements already made was on the front burner of thought. Also noted was the need for more sidewalks, a recycling program, re-purpose the train station, add a natatorium for swimming, and the city acquire Heritage Park to maintain. More green-space, an arts district, community gardens, neighborhood communities, better broadband infrastructure and more vocational and job training centers were also on the list of many.

Tuesday morning, City Manager Marc Maxwell sat down with KSST News to review the event. Maxwell said it was everything he hoped it would be and more. He was surprised by the turn out but pleased with participation. He noted that many have seen their ideas put in place recognize the reward for their effort. Maxwell said the Comprehensive Plan will assist the city as growth continues. He stated that when new development comes, the plan will guide in the process and be welcoming.

The development group met with utility and others Tuesday and will host an open studio Tuesday and Wednesday from 4 p.m. until 7 p.m. Citizens are welcome to visit with planners during those times. It is a come and go time with no agenda for the time.