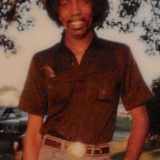 He was born on August 16, 1941 in Hopkins County, the son of Willie B. Edwards, Sr. and Ora Lee. He was of the Baptist faith. He worked as a butcher at Krogers for 25 years and later worked in maintenance for Texas A&M Commerce for several years. He married Mary Jean Smith on March 30, 1963 in Hopkins County. She preceded him in death on July 5, 2016.

In addition to his wife he was also preceded in death by his parents, brother, Willie James Brooks, sister, Maggie Finnie, and sister-in-law, Cassie Edwards.