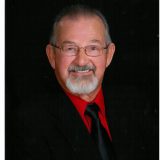 W.D. “Skeeter” Scott was born on May 5, 1940 in Mahoney, TX, the son of Lawton Maurice Scott and Pauline (Tolleson) Scott. He married Judy McIntire in Hugo, OK on January 2, 1959 and she preceded him in death in 2011. He then married Loretta Hooks Cox in Pickton, TX on February 8, 2013.  “Skeeter” served in the Army, retired from Texas Utilities and was a member of Lake Highlands Baptist Church.