Sandra Phillips was hired in April 1967 in a ground-floor position at City National Bank’s original downtown building.  Since then, she has seen the industry change, the building change and almost all the equipment she works with on a daily basis. One thing that hasn’t changed is that CNB is “good people to work for. They care about their employees”.

Sandra was hired right out of college and like most beginner employees, she was in bookkeeping. Then, sums were figured on an old-fashioned adding machine. The first calculator took up most of the desk top. Her first boss was Billy Jones, CNB President who had succeeded his father, Will Jones. Henry MaHaffee was Senior Vice President and Lonnie Campbell was Cashier. The bookkeeping team would formulate a customer’s note from a paper form filled out by the loan officer when he was preparing the loan application for the customer. She likes to remember how important the loan officer was in many people’s lives, almost like a family friend. Frequently, a customer might stop by the bank just to tell his loan officer about a good crop, a wedding, new baby or funeral in his family.

She moved up to teller, loan secretary and Mr. Jones secretary. Today Sandra is Assistant Vice-President and handles Collections and Accounts as well. Each morning, she checks the Fraud Program Report which is one way that CNB’s safety policies protect their customers from today’s cyber dangers.

After spending most of her career in a downstairs office, Sandra moved up to the second floor when the bank was expanded and completely remodeled. She doesn’t get to see as many customers, but she is still the go-to person when an employee wants to ask, “Sandra, do you remember…?” CNB employee Dorothy Edwards already celebrated her 50 year mark; she was on the job in bookkeeping when Sandra was hired. Phyllis Loyd came on board 2 years later. Outside of moving into the computer age, one of the biggest changes for the ladies over the years was the dress code. Only dresses were allowed at work until 1970 when pant suits came into style. Formal bank uniforms gave the ladies slacks and matching skirt to go with the required shirt and vest. Men’s styles have relaxed as well, but a white shirt and tie or even a 3-piece suit was the standard for bank officers in Sandra’s early days.

Sandra’s dad worked for Foremost Dairies in Dallas and moved his family to Sulphur Springs when she was 5 years old. She graduated SSHS and attended East Texas State University. She has a son and a grandson. When her husband passed away, she moved into town closer to work. She likes to garden, sew and do needlework, and read. She does not plan to retire. 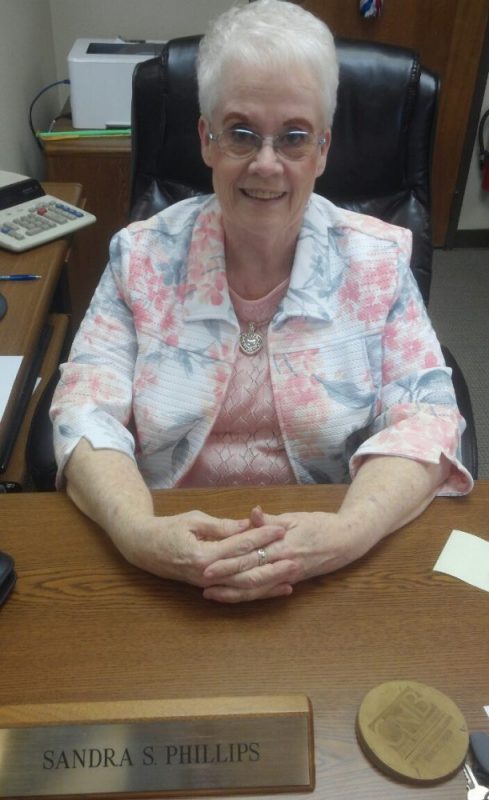