In May, 2016, the North Hopkins Independent School District Board of Trustees named Dr. Darin Jolly as finalist for Superintendent to replace the retiring Donna George. He was chosen from a pool of 55 applicants. Jolly had been recommended to the school district by the Texas Association of School Boards Executive Search Services. He has had no dull moment since arriving at North Hopkins. 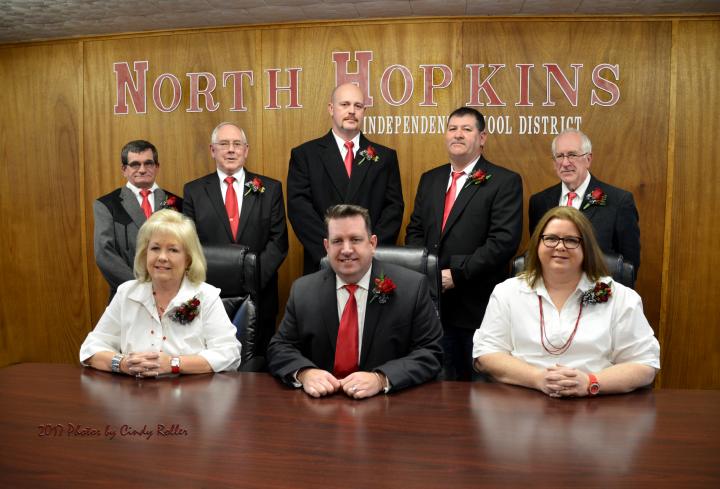 The North Hopkins Board determined that Jolly, who had 21 years of experience in education, brought a broad and extensive set of leadership skills to the position. Having served as a superintendent, high school principal, junior high principal, assistant principal, director of fine arts, and classroom teacher, Jolly understands the needs in education at all levels. While serving at North Hopkins those leadership skills have been utilized to the fullest. His experience, including a bump in the leadership road while serving the Kenedy ISD, is proving valuable. According to Jolly and the board at North Hopkins at the time of his hire, a full investigation of his service and any questions raised had been fully answered and he was deemed worthy of hire. He seems to have proven his value to the district (see list of accomplishments later in story); although, his time as superintendent has not been without questions asked.

During the April board meeting at North Hopkins, Dusti James, a parent of student in the district, addressed the board during public forum. She was the only one to speak and the board could not answer her question as guided by state law. James read an email that she had sent to board members and school administration. In the email, she questioned the reassignment made for next school year of the elementary school principal and the questioning of students in third grade regarding assistance on a Benchmark test. The reassignment of the principal had been made in previous board meetings.

The reassignment of LeAnn Tadlock to reading specialist was seen as a demotion according to James and others who discussed the issue with KSST News. Kodi Wright, a former teacher at Cooper Junior High, will become elementary principal with the Fall 2017 semester. Wright has been serving North Hopkins as an Instructional Specialist, a new position in the district created during Jolly’s administration.

The Benchmark test is a preparatory test for the STARR, a mandated test for all school districts. During the board meeting this past week, it was noted that STARR scores had increased over the past two years for elementary students at North Hopkins. There are 266 students on the elementary campus and 259 students on the secondary campus, according to a report given by Mrs. Tadlock, the Elementary School Principal.

Jolly told KSST News, “I’m thankful for an amazing faculty and staff in North Hopkins. This year, we’ve been focusing on improving academic engagement for our students in all subjects. Our teachers care for our students and we’ve seen growth in learning and increased Career and Technology opportunities. We’re in review and improvement mode in all areas of our school operation, facilities, transportation, academics and experiences for students. I’m excited about the future of North Hopkins ISD as we focus on excellence.”

Jolly said, “I’m thankful for everyone’s hard work and dedication to our school. Our staff, board of trustees, and community is student-focused and that’s what it takes to build and maintain a foundation for learning in schools. We’re diligently maximizing our staff and resources to improve the learning quality and experience for all students.”

Jolly presented KSST News with an overview of areas that the district has been reviewing and improving for the best interest of students and education in 2016-2017. He stated that school operations have been reviewed for safety, quality, and efficiency.

The cafeteria service has increased food choices and extras available while improving the quality of the food served.

A review of transportation included developing a long-range plan for replacement and purchases of additional vehicles for the fleet including an SUV and auto for drivers’ education.

The facilities have seen an analysis of mechanical, roof, and structures for current and future utilization. Increasing energy efficiency and meeting energy needs has also been on the front burner of planning and preparation.

Custodial staffing and scheduling for efficient and quality of operation has included training for quality and maximizing effort for the staff. A localized custodial service has been implemented. Formerly, custodial services were outsourced. Also a reduction of overtime has been realized.

In education, a focus on “best practice” for higher quality of classroom instruction and student engagement has been made a priority. Increased technology opportunities for learning in the classroom and implementation of Google Classroom and other applications along with improved teacher support for technology in the classroom have been added. Embedded professional development and teacher collaboration opportunities, expansion of extra-help and tutorial opportunities for students, heightened reading instruction and foundational learning in elementary school are being implemented. Also included are curriculum planning and alignment for learning improvements along with increased CTE course offered.

A restructuring of staff for maximized impact for district needs and staff analysis for staff/student ratios in regards to funding have been studied.

A new program for sixth grade students is band. There are 35 students in the band.

Jolly stated that changes will slow as the development of what is now in place continues in efforts to continue to provide quality education at North Hopkins.