Hopkins County EMS, which is still owned by the Hopkins County Memorial Hospital District, presented a proposal to it’s governing board earlier this week to accept another ambulance.  The proposal paves the way for the local EMS to house, maintain, and operate one of the State of Texas’ “Ambus” vehicles.   This vehicle is a special EMS unit that can transport or care for up to 20 patients at once, at least ten times as many patients as a standard ambulance. The vehicles are equipped like ambulances, including patient ventilators, wireless vital signs monitoring, suction devices and other life-saving equipment.  Although the Ambus can be activated via a statewide response team, it can also be put into service locally, by local personnel.   One of only 13 busses statewide, the bus is property of the State of Texas, but the local district would be responsible for housing and operating the vehicle during the two-year agreement with the state.

The Texas Emergency Medical Task Force would like to relocate a bus to Sulphur Springs so that it would be more centrally located in this region.   Since the bus would be under local control, it is possible that it could also facilitate multi-patient transfers.  Brent Smith, EMS Director stated, “Sometimes, our EMS team has multiple transfers going to Tyler, for instance, and the Ambus could take multiple patients instead of using two or more ambulances.”    The Ambus stays “ready to roll” and assists in other instances that could arise.  Recently, the Ambus stationed in Palestine assisted in a nearby community to transport nursing home patients to another facility when the nursing home lost power.  With it’s ability to transport and monitor 20 patients at a time, the Ambus made quick work of the transfer.

Although the Ambus is technically owned by the State of Texas, the State reimburses our local District for personnel labor and expenses when the Ambus is activated by the State.  Geographically, the Ambus would respond to larger emergencies from Rockwall to Texarkana along the I-30 Corridor and also a similar area along the I-20 corridor.  Theoretically, the Ambus could respond to larger emergencies at farther distances. 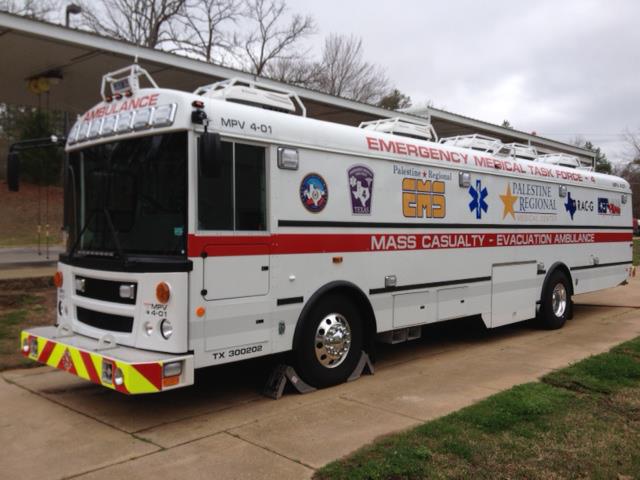