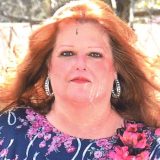 Kathie Lee Hornbuckle, age 61 of Winnsboro, passed away on Tuesday, April 11th, 2017 in Tyler. She was born on October 31st, 1955 in Overton, Texas, to the late Hershel Tate and Elizabeth Tate. She was a longtime florist with flowerland and was a member of Rock Hill Baptist Church. She was preceded in death by her parents and by one sister, Becki Tate.

In lieu of flowers donations may be made to the Rock Hill Baptist Church Building Fund.