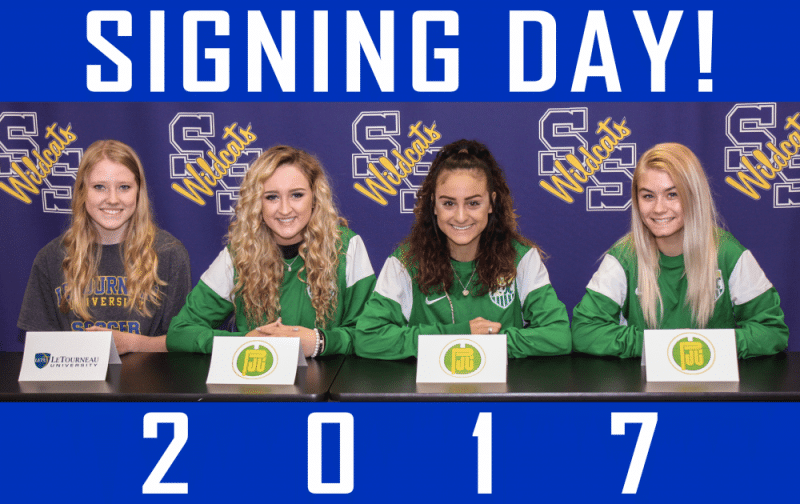 Payton Pierce found all about LeTourneau from her sister. She said she visited and loved the campus. During this year’s high school season, she said she decided she wanted to go to college and continue to play soccer. LeTourneau indicated they expected to keep her on defense. Payton plans to study biology and then train as a Physician’s Assistant after college. She began playing soccer at 3-years old. Payton doesn’t remember much if it but she’s been told she cried at her first game but her father held her hand during the game. She thanked her father for getting her involved in soccer on senior night this year.

Abbi Hale likes that Paris Junior College is close by so friends and family can come and watch her play. She says Paris is a good community and she likes that two of her Lady Cats’ teammates will be joining her. Abbi’s been told that the goalkeeper position at PJC is open. She says she’s been playing in the goal since the eighth grade. Abbi wants to continue playing soccer after PJC. Eventually she would like to get a doctoral degree and become a certified registered nurse. Abbi admits she would really like to put on her high school jersey for one more game but then she adds, it’s time for her to grow up.

Kamryn Wimberly says PJC coaches saw her at a tournament and expressed interest in her. She says she visited the campus and liked it and she liked the PJC coaching staff. Kam says PJC is close to home and she says going to school with teammates will make the transition into college easier. She says she expects to play on defense at PJC but she says the coaching staff may want to move her around. She figures she will start if she works hard. If they need someone to take a big penalty kick, Kam would be the one. She will always be remembered for successful penalty kicks in two straight playoff games last year that won the games for the Lady Cats. Kam says her ultimate goal is to become a Physician’s Assistant.

Ciarra Rico calls Kam Wimberly her right hand and she is very happy they will be going off to college together. For Ciarra, PJC is close to home, is giving her a scholarship and it has what she calls a homey atmosphere, just like Sulphur Springs. She too expects to play defensive midfielder like she did in high school. Ciarra would like to start right away but she knows that will depend on what she comes in and does. She says she will miss her high school teammates. Ciarra hopes to play soccer at a university after PJC and to study psychology.

Lady Cats Soccer Coach Jesus DeLeon said he felt like a proud uncle at Thursday’s signing. He said he has known most of the players since the seventh or eighth grades and he has watched them grow into the players they are now. While he’s proud of them, he said he is also a little sad to see them go. But he added he’s happy that they have the opportunity to continue playing soccer. He said they have worked hard and they are being recognized for that. Coach DeLeon said they would all do great.