Hopkins County Commissioners Court proclaimed April “Child Abuse Prevention Month” during their regular session Monday morning at the courthouse. They recognized members of CASA, Child Protective Services, the local Judicial System, and law enforcement for their continued efforts.  Each agency strives to protect children from abuse and works in assisting children to a better life. 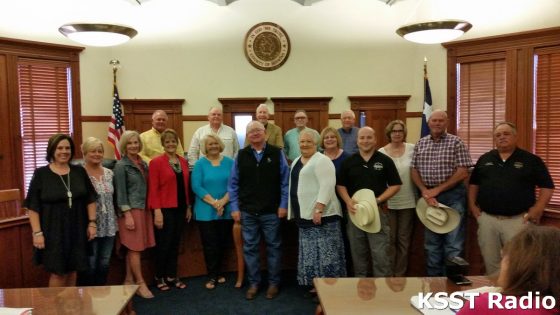 Hopkins County Judge Robert Newsom, who as a state judicial district judge was involved in a number of cases involving child safety, read the proclamation after thanking those who serve to protect children’s safety and rights.

“WHEREAS,   Hopkins County prides itself on giving back to the community and contributing to the quality of life among our citizens; and

WHEREAS,   Child abuse prevention is a community responsibility and finding solutions depends on involvement among all people; and

WHEREAS,   More than 109 confirmed victims of child-abuse and neglect were reported in Hopkins County in 2016; and

WHEREAS,   Everyone in the community should become more aware  of child abuse prevention  and consider helping parents  raise their children in safe, nurturing environments as well as supporting local professionals dedicated to meeting the needs of child abuse victims; and

WHEREAS,   The County of Hopkins, Texas urges all citizens to work together to reduce child abuse and neglect and to significantly improve the response of our community when child abuse occurs in the months and year ahead; and

WHEREAS,   This effort will give abused and neglected children in our community and around the country a chance for a safe and positive future; and

NOW, THEREFORE, I, Robert Newsom, Hopkins County Judge do hereby proclaim the month of April, 2017 to be “Child Abuse Prevention Month” in Hopkins County, Texas, and urge all citizens to join in a national effort to raise awareness and help reduce child abuse and neglect in years to come.