A Cumby Police officer assisted by a Hopkins County Deputy made traffic stop near the 113-mile marker on I-30 Sunday evening around 7 p.m. The odor of marijuana emitting from the vehicle was quickly recognized by the Cumby officer. During a probable cause search, Grace Elizebeth Diana Jones, 25, was found to have a small amount of a green leafy substance believed to be marijuana on her tongue. 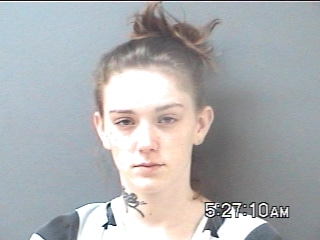 The Cumby officer asked her to open her mouth. However, she swallowed the contraband. She did admit to having smoked marijuana four hours earlier. In her possession was a glass marijuana smoking pipe belonging to her.

Jones was charged with Tamper/Fabricate Physical Evidence with Intent to Impair (a Felony 3), no driver’s license, and possession of drug paraphernalia. It was also found that she had two warrants issued by the Sulphur Springs Police Department.

The Sulphur Springs Police Department continues to serve its citizens with pride in its overall mission and will strive to provide the best possible police force in the 21st century.