In field events, Josh Thompson won the discus with a throw of 125 feet. D.J Hall was second with a toss of 120-feet. Ian Blanch was third in shot put. In triple jump, Tiesan Goodson with fourth with a total of 41 feet.

In the 3200-meter run, Landon Thornton was fourth and Peyton Vickery sixth. Eli Sellers placed fourth in the 800-meter run with a time of 2:09. In the 110-meter hurdles, Terrell Turman was second with Landry Tyson third. In the 100-meter dash, Ryan Humphries was second with a time of 11.2 seconds. The Wildcats 4 X 200-meter relay team placed. The team members are Goodson, Turman, Damiyon Dugan and Lawrence Worth.

In the 300-meter hurdles, Humphries finished a close second. Mason Buck, running in his first high school track meet, was third. Tyson was fourth. In the 1600-meter run, Vickery was second and Thornton placed. The Wildcats 4 X 400-meter relay team was fourth. That relay is made up of Nabian Ramirez, Tyson, Michael Jefferson and Humphries.

Coach Young said he likes how the Wildcats are competing. The Wildcats’ next meet takes place next Friday at Mt. Pleasant. 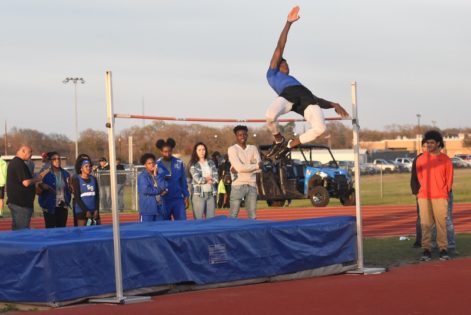