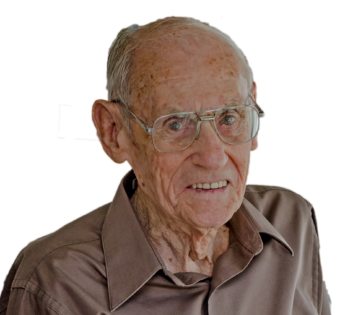 Malcolm passed away peacefully in his home on March 4, 2017.  Malcolm was born to Agnes (Bushnell) King and Elijah Augustus King in Lake Charles, Louisiana in 1924.  He was a devoted husband, father, grandfather and great-grandfather who was passionate about his faith and his life’s work.   Malcolm served for more than 60 years as a Minister of the gospel of Christ and continued preaching for various area churches of Christ until his 90th birthday. Prior to becoming a minister, he enjoyed various careers including Able-Bodied Seaman in the US Merchant Marines, where he traveled the world and had the incredible experiences of steering a tanker ship through the Panama Canal and surviving a hurricane at sea off the Cape of Good Hope.   In his spare time, there was nothing Malcolm enjoyed more than fishing or having a cup of coffee with a new friend (and it seemed as though he made a new one almost every day).    Malcolm never allowed physical disabilities or pain to stop him from being an attentive and devoted husband, son, father and minister spreading the gospel of Christ.    He was quick with a joke, had an infectious laugh, was accepting of others (faults and all) and was a joy to be around.