A group of Brashear residents are testing the interest level of fellow area residents regarding the incorporation of Brashear into a town or village, according to Hugh Pettigrew, one of several who desire to incorporate. Those receiving mail with the Brashear zip code have received a mailing sent out announcing a meeting Saturday, March 25, 2017 at 5 p.m. at the Brashear Baptist Church Family Life Center.

Pettigrew said four or five residents decided that it was time to create a community that maintains all that we like and enjoy living in and to protect the residential community atmosphere. He said the way to accomplish this task is to incorporate. He stressed this is a community conversation and all who are interested in the community are invited to attend the meeting. He hopes to have a good turnout of those who live in the area to gain a cross section of opinion. He stated that all who received the letter would not be included in the incorporation. He noted that the conversation is needed to test the level of interest.

Pettigrew believes the positive for incorporation is for the incorporated area to have control of land use, expansion of industry, and other restrictions inside city limits. Noting the law requires that the area cannot be larger than two square miles for the initial incorporation, Pettigrew pointed out that the area would basically include the downtown area and some surrounding area. He said it is not a big area. The negative, as seen by Pettigrew,  is the cost to land owners in taxes and the general sentiment of distrust of and intrusion of government into private lives. He said not many in the area are willing to sanction more government. “People in our area won’t welcome that,” he said.

There are limits to their incorporation according to Pettigrew. He said that no more than 2 square miles may be incorporated and there must be a minimum of 200 residents and 50 registered voters living in the 2 sq. mile area.  He noted that to accomplish this, the geographic area will have to be drawn based on either roads or property lines. He said the local tax appraisal district has assisted in providing a possible plot for the incorporation lines but he is unsure if there are sufficient residents and/or voters living within the bounds. He said the meeting will provide some answers as they “…get a feel for sentiment…”  and create the geographic area to include the correct numbers. If the local residents are interested, the only economical way to draw lines for the incorporated area is by using roads and or property lines and that will mandate a survey or the use of meets and bounds as identified on landowner deeds.

He also point out that Brashear area residents are not interested in their community being taken over by another entity, especially those entities that would allow the sale of alcohol. Pettigrew noted at Sulphur Springs has stated the city is not interested in expanding into Brashear. However, he noted that Cumby is rapidly expanding in their direction. 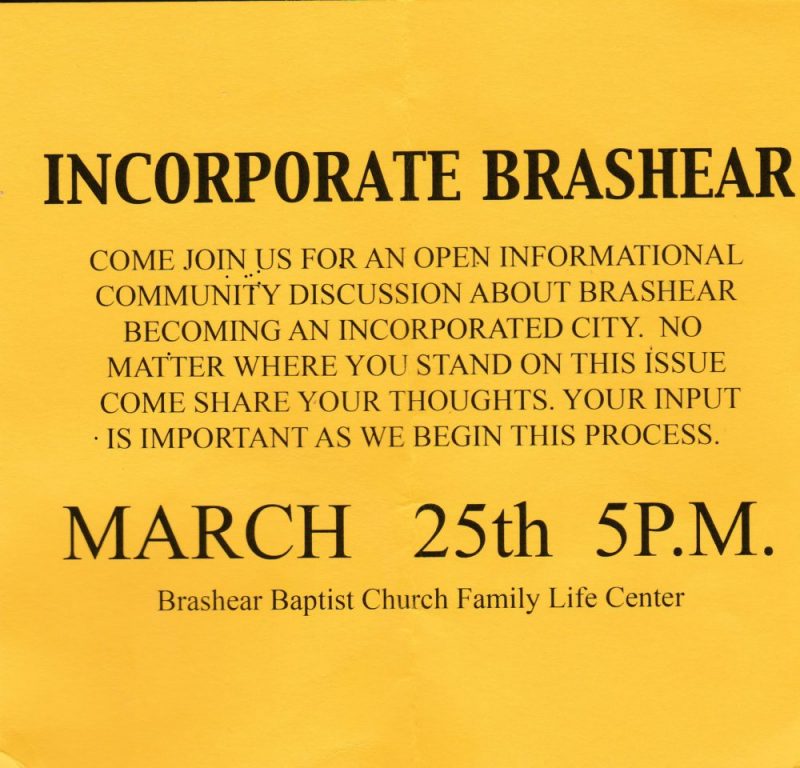