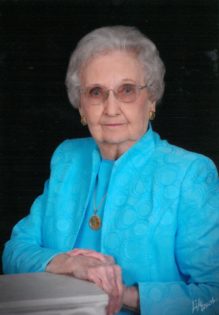 Mrs. Brice passed away Tuesday, January 24, 2017 at her residence.  Wilma Ruth Vaden Brice was born November 6, 1920 to Bessie Jewel (Leewright) Vaden and Roy Lodwick Vaden.  She grew up in the Old Tarrant Community of Hopkins County.  She married Carl Stanton Brice on December 20, 1941 in Cooper, Texas.  Mrs. Brice was a member of the Church of Christ, first at Old Tarrant and later at League Street Church of Christ.  She attended East Texas State Teachers College and taught school in Ridgeway until 1943.  During World War II, she followed her husband, who was in the Navy, to South Bend, Indiana, Cambridge, Massachusetts and Sea Island, Georgia.  During the Korean Conflict, they lived in California.  After returning to Sulphur Springs, she worked at AMPI and Koon’s Feed Store. Mrs. Brice was a member of Daughters of the American Revolution.

Her husband preceded her in death in 1997.  She was also predeceased by her brother, Leewright Vaden; brother-in-law, Randell Brice; and an infant baby sister.

The family would like to thank the very caring Wesley House Staff.