Before a packed auditorium the Mount Vernon School Board voted 5-2 to not remove Lady Tiger Basketballl Varsity and golf coach Brad Floyd. Floyd was accused of a long list of financial and professional errors including the violation of the educational code of conduct by the Superintendent of Schools. The list was read by the superintendent during an open session of the board at the request of Floyd’s attorney.  The superintendent noted a specific bank account opened, as a non-profit organization, in the name of the basketball team. It was stated that Floyd had not kept accurate records on the account nor had he sought school  approval for the account.

Floyd is not the first instructor the superintendent has asked the board to terminate due to professional errors regarding financial accusations. Mount Vernon’s Theater Arts instructor, who had served the district for a number of years and had seen success in One Act Play competitions, was terminated. More than  one principal has resigned as well.

The proposed termination placed before the board was placed in jeopardy according to Floyd’s attorney based on state law regarding termination of an employee. The district is required by law to provide a specific time frame and specific steps that allow Floyd opportunity to respond to allegations including an independent hearing regarding the termination which would give Floyd opportunity to speak to the charges. Floyd could not respond to the allegations during the board meeting Thursday night. He would have had opportunity to ask for a public hearing but the board refused to give opportunity for Floyd to speak even though it was pointed out to the board that Floyd had asked for the meeting held Thursday to be open and not in executive meeting. Shortly after the observation, the board took a short break.

The Mt. Vernon School Board met a special meeting for Thursday, January 5 at 5:45 p.m. in the Auditorium to consider the termination or suspension of Mt. Vernon girls basketball Coach Brad Floyd. Floyd was accused of misusing district funds, a charge he denies. 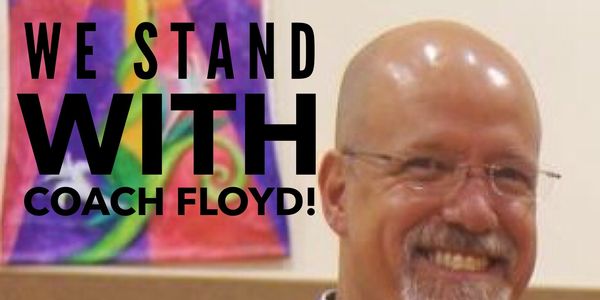 A petition in support of Coach Floyd was circulating in town and on line. The coach’s supporters intended to present the petition, which urges a no vote by the board on the question of terminating the coach or placing him on suspension without pay. The on-line petition drew nearly 1,000 supporters comments. The petition notes that no public comments will be allowed at the Thursday night board meeting, which has only the one agenda item dealing with Coach Floyd.

“This petition is being circulated to show the MVISD School Board and Superintendent just how many people support Coach Floyd. Coach Floyd is a valuable asset to our school district and community. We will no longer sit idly by and watch as innocent, hard-working employees are subjected to such treatment as Coach Floyd (and others before him) is enduring. We also feel that the timing of this decision shows no regard for our students and their performance, hard work, and dedication. We respectfully ask the Board to not terminate or suspend Coach Floyd and to show their support for him by voting NO either of the proposed recommendations.

Please sign and share this petition, and also be present at the meeting this Thursday night at 5:45. It is time to take a stand for what is right! We stand with Coach Floyd! #keepcoachfloyd”