The Wildcats’ basketball team was finally able to pull away from the pesky Pine Tree Pirates in double overtime winning 66-56 in Wildcats Gym Tuesday night.

The Wildcats were cruising along in the game until sophomore center Victor Iwuakor fell to the floor hard apparently bruising some ribs early in the third quarter. He courageously returned late in the fourth quarter and propelled the Wildcats to victor in overtime and double overtime with his accurate foul shooting and his defensive blocks and steals. Iwuakor hit 9 of 10 foul shots plus a basket in overtime and double overtime. He ended up with a game high 23 points. Senior guard Ke’Ontae Dunn had 4 double overtime points and ended with 17 points. Iwuakor went out with the injury with about 7 minutes left in the third quarter and the Wildcats leading by 17, 32-15. Pine Tree began to chip away and the Pirates finally tied the game at 47-47 with a three pointer with just 4 seconds left in regulation. The Wildcats last shots would not fall forcing overtime. Both teams scored 7 points in overtime. Finally the Wildcats broke away with points from Iwuakor and Dunn in double overtime outscoring Pine Tree 12-2. 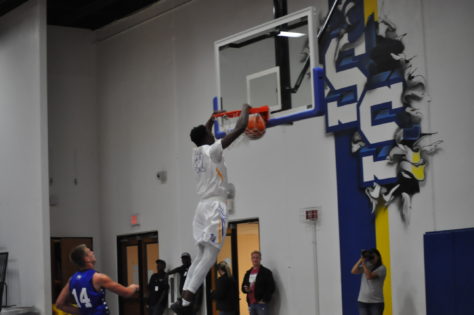