It comes in with a different name every legislative session, this idea of letting students take their public school money with them if they decide to go to private schools instead.Vouchers. School choice. Scholarships. Education Savings Accounts.

It’s not a complicated idea, but it’s a controversial one. And it’s not as partisan as you might think, in part because it mixes up each of the major political parties’ ideas about how government works.

While it seems to be a fight about education, it’s really a fight about money — about whether taxpayers should foot some or all of the tuition bill for private elementary and secondary education.

The Legislature remains split. Just last week, Lt. Gov. Dan Patrick called out House Speaker Joe Straus to try to force a vote on what Patrick calls school choice. The Senate has approved voucher legislation as recently as two years ago. The House didn’t vote on that bill. (Patrick has scheduled a news conference for Monday with Sen. Larry Taylor, R-Friendswood, chairman of the Senate Education Committee, to discuss school choice legislation.) 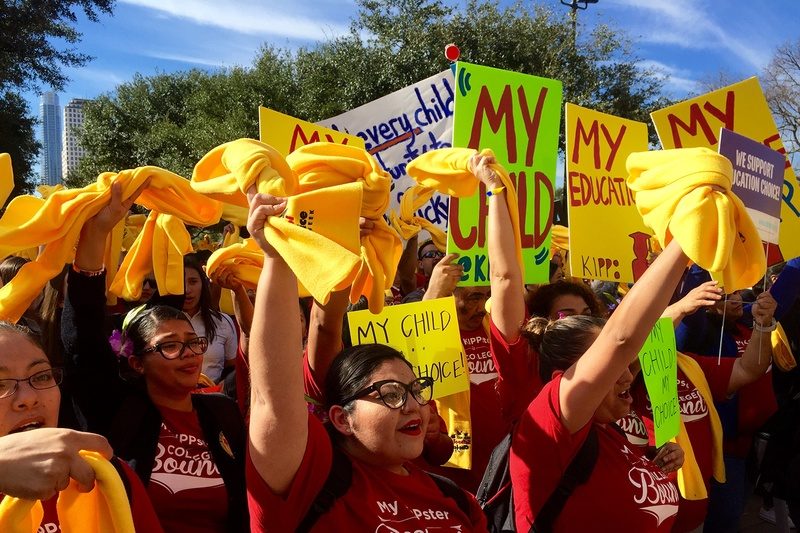 “We want a vote up or down in the Senate and in the House this session on school choice,” Patrick told several hundred demonstrators last week at a rally in Austin. “It’s easy to kill a bill when no one gets to vote on it.”

Gov. Greg Abbott told the same crowd he’s ready to sign a choice bill into law: “I hope and I urge that that law reach my desk. And when it does, I will make the choice to sign it and authorize school choice in the state of Texas.”

Both leaders have referred to school choice as a civil-rights issue.

But some legislators from both parties — especially in the House — are split on vouchers. Patrick is hoping a public vote would force them to his side or at least into the open, where voters can see what’s what. The public education establishment is against it, thinking vouchers would rob schools of critical resources. And the Trump administration is about to join the fray; Betsy DeVos, the new president’s nominee for education secretary, is an outspoken advocate for vouchers.

It’s all about the money, but this debate starts with a public education problem easily stated in the form of a question: What options are open to a student (and the student’s parents) who is stuck in a lousy public school?

One option is to repair and/or replace any failing public schools, a gnarly problem that has proven to be well beyond the capabilities of elected state officials in Texas. Another is to allow the students to bail out, which has the advantage of allowing the kids to get on with their educations while the grownups are trying to sort things out.

The options on where a student can go open from there, to other public schools, to charter schools that are privately owned but run with public money, to private and parochial schools to kids educated at home by their parents.

The battle isn’t really about whether the kids can move around, but about who pays for it and whether the educators being paid are accountable to the taxpayers who pay them.

One option is to repair and/or replace any failing public schools, a gnarly problem that has proven to be well beyond the capabilities of elected state officials in Texas. Another is to allow the students to bail out.

This voucher argument is not as much about choosing schools as it is about paying for the schools where you’d like to see your kid get educated. Some state officials want to give you the money that would otherwise be used for your public education, and some of them don’t.

Parents are already free to move their kids to whatever school they want, but if they can’t afford private schooling, the argument goes, they might as well have no choice at all. If public money, raised from local and state taxpayers, goes to pay for those private schools, the questions and the political difficulties blossom.

Patrick, believing he has the support he needs in the Senate, wants a vote in the House. Abbott wants a bill. Straus is waiting to see what his members — the state representatives who elected him — want to do.

He’s also got the upper hand, politically: The House has something the state’s other two leaders want. At the beginning of a legislative session, that’s a valuable card to have in your hand.

This article originally appeared in The Texas Tribune at https://www.texastribune.org/2017/01/30/analysis-what-we-talk-about-when-we-talk-about-sch/.