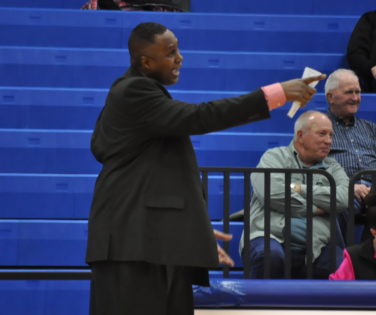 Lady Cats Basketball Coach Jeff Chapman admits when he was a young coach, he was one who stressed offense. Later experience taught him that offense might win games but it was defense that wins championships. In his eight years in Sulphur Springs, he has emphasized defense and he hopes his players enjoy playing defense. They seem to. Time and time again this season, the Lady Cats stingy defense has been the key to victory. The Lady Cats featured defense again against Pine Tree Monday and the Lady Cats claimed a 52-35 win. Coach Chapman says he wished his team had shot the ball better against the Lady Pirates but his bottom line is, a win is a win. He says the game is a hard one to prepare for. Coach Chapman says the players are giddy about Christmas and he says with school out they go to sleep too late and tend to sleep late. He accused one unnamed player of yawning during Monday’s game. The Lady Cats practiced Tuesday and Coach Chapman then send his team off for a Christmas break. The Lady Cats are 3-0 in district play and are 14-3 for the season. They return to the court to play in an Idabel, Oklahoma tournament on December 28-30. The Lady Cats open up against Haworth, Oklahoma on December 28 at 10 a.m.