Wildcats Face Mesquite Poteet in Bi-District at Lindale; What the Coaches Are Saying

Home » Featured » Wildcats Face Mesquite Poteet in Bi-District at Lindale; What the Coaches Are Saying

It’s playoff season and the Wildcats’ football team and Mesquite Poteet meet in a bi-district match at Lindale on this Friday night game day. Kickoff is at 7:30 p.m. The Wildcats are the visiting team and fans should sit on the pressbox side. The Poteet Pirates are 7-3 this season but the losses were to Denton Ryan, Mansfield Lake Ridge and Highland Park. The Wildcats are 4-6. The Pirates head coach is Kody Groves in his fourth year. He has a 38-11 record at Poteet. Wildcats Coach Greg Owens is in his eleventh season. His record at his alma mater including playoffs is 89-59. Coach Owens is 2-0 versus the Pirates as coach here. Mesquite Poteet’s Coach Groves says the Wildcats appear to be a better team than their 4-6 record would indicate. The Pirates defense is the strength of their team and their coach says they are playing at a high level. We’ll bring you all the game action on KSST Radio as the Wildcats take on the Mesquite Poteet Pirates. We will also videotape the game for replay on Channel 18 TV on Suddenlink Cable on Sunday at 8 p.m. and Tuesday at 7 p.m. The winner will face the winner of the Little Elm and Frisco Lone Star game.

At his weekly media gathering Wednesday, Wildcats Football Coach Greg Owens said his team has had a good week so far preparing to play Mesquite Poteet in a bi-district game Friday at 7:30 p.m. in Lindale. Coach Owens indicated the Wildcats have been in playoff mode for three weeks now. They needed district wins over Greenville and Hallsville the past two weeks to get into the playoffs. Coach Owens said JV team volunteers are helping the varsity get ready for Poteet. The JV players will suit out for the playoff game bringing the roster to around 80 players. Coach Owens said the game plan was not overly complicated this week. He said the team just needed to line up, play football and get after it. Coach Owens said the Pirates are very athletic on both sides of the ball but especially on defense. They also have a lot of senior starters and they have lots of confidence from past playoff participation. The Pirates quarterback is a Texas signee in baseball. Coach Owens said the Pirates also have talented wide receivers, and running backs along with a good sized offensive line. He said Offensive Coordinator Matt Young compares Poteet’s defense to Texas High while Defensive Coordinator Triston Abron thinks Marshall when he see the Pirates on tape. Coach Owens said he has enjoyed getting to know Mesquite Poteet Coach Kody Groves

The Wildcats meet Mesquite Poteet for a bi-district playoff game at Lindale Friday night at 7:30 p.m. Poteet’s head football coach is Kody Groves, who is in his fourth year as the Pirates head coach. In June 2013, Groves was promoted from defensive coordinator to head coach to replace Randy Jackson, who went to Plano East as head coach. Coach Groves had previous coaching stops at Coppell, Midland Lee and Midlothian. The Pirates are 7-3 this year. They were 6-1 in district play making them district co-champs with Highland Park. The Pirates’ losses are to quality teams: #1 state ranked Denton Ryan and Mansfield Lake Ridge is non-district games and to Highland Park in district. Coach Groves said his team has had a pretty good year so far. He said a lot was expected of this team this year. He has 15 starters from last year’s team and six players who have started or played significant minutes since they were sophomores. Still Coach Groves said after ten games, he doesn’t believe his team has quite put it all together. However Coach Groves said the Pirates defense has played at a high level. They are giving up about 15 to 16 points a game and about 250 to 260 yards per game. Some of those yards came late in games that had been long decided. An offensive different maker for the Pirates is senior running back Daiquan Jackson. Jackson was a starting safety for the Pirates the past two years. This year he returned to what Coach Groves called his natural position. Jackson scored 30 touchdowns as a freshman team running back. He is being recruited as a safety. Jackson ran for 200 yards in the second half of the team’s 20-17 loss to Mansfield Lake Ridge. The speedy running back is on the Pirates sprint relay and 4 X 200 relay teams. Coach Groves calls him a great kid. The Poteet quarterback is a three year starter, Kaleb Fletcher. He’s been on the Pirates baseball team since he was a freshman and is committed to Texas as a baseball player. Coach Groves said Fletcher was won 28 or 29 games as quarterback in his three years. He added he’s a great leader. The Pirates defense has great experience. This year there were two returning defensive linemen, three linebackers and two cornerbacks. Coach Groves said since Jackson was moved from defense to offense, two safeties have more than filled in for him. Coach Groves said he was wary of the Wildcats, coached by his good friend Greg Owens. Coach Groves said the Wildcats appear to be better than their 4-6 record. He said he likes Wildcats quarterback Ryan Humphries who he called a competitor. The former defensive coordinator said he really liked defensive lineman D’Idrec Dugan and the whole defensive line. Coach Groves said Mesquite Poteet could not allow the scary Wildcats to hang around during the playoff game.

Wildcats Offensive Coordinator Matt Young said last Friday’s playoff spot clinching win over Hallsville was a great night and a huge win for the Wildcats. He said the players have been through a lot and he added he respected them for getting back into the playoffs. Last Friday Coach Young said Gideon Gregory, Richard Green and Jessy Darrow led an offensive line that was physical up front and did their part to get the ball moving down the field. He was pleased with receiver D.J. Hall with his blocking, catching and runs after the catch. Coach Young said Landry Tyson and Austin Dodd both had good catches. He praised runners Colton Allen and Searn Rodgers for carrying the ball. Coach Young said despite fewer catches for receiver Simeon Taylor who now draws a crowd, he said the receiver continues to make plays in other ways. The talented Mesquite Poteet defense is next for the Wildcats offense Friday at 7:30 p.m. in Lindale. Coach Young said Poteet Coach Kody Groves is a former defensive coordinator and his imprint is very much on the Pirates’ defense. He said the Pirates are not that large but they are very aggressive and seasoned with numerous returnees from past years. He said Poteet presents a great opportunity for the Wildcats offense.

What can Wildcats Defensive Coordinator Triston Abron say after his defense held Hallsville to negative yards after the first two quarters last Friday? He said no matter what was called by Hallsville, his defense executed the play properly. Coach Abron said the defensive line got penetration, the secondary did a good job in coverage and he added the team tackling was the best all season. He added he believed the effort topped the Texas High game. Coach Abron said he tells his team to not allow themselves to be blocked and he said that’s pretty much what happened Friday. He called defensive lineman D’Idrec Dugan’s game phenomenal. Dugan collected over 20 cat paw decals this week for big plays last week. Defensive lineman Cameron Cooks also had three early sacks. Coach Abron said the Hallsville offensive coordinator praised the play of Dugan and Cooks. The Mesquite Poteet offense is next for the Wildcats’ defense. The Pirates have a three year starter at quarterback and Coach Abron said he can really pass. Coach Abron compared Poteet to Marshall’s offense. He said the Pirates have a lot of talent at the wide receiver spot. Coach Abron said to add a spark to the offense this year, the Pirates switched a very good safety on defense to running back. That running back his been dynamite according to Coach Abron. However he said he might have spotted a few things that the Wildcats defense could take advantage of Friday. 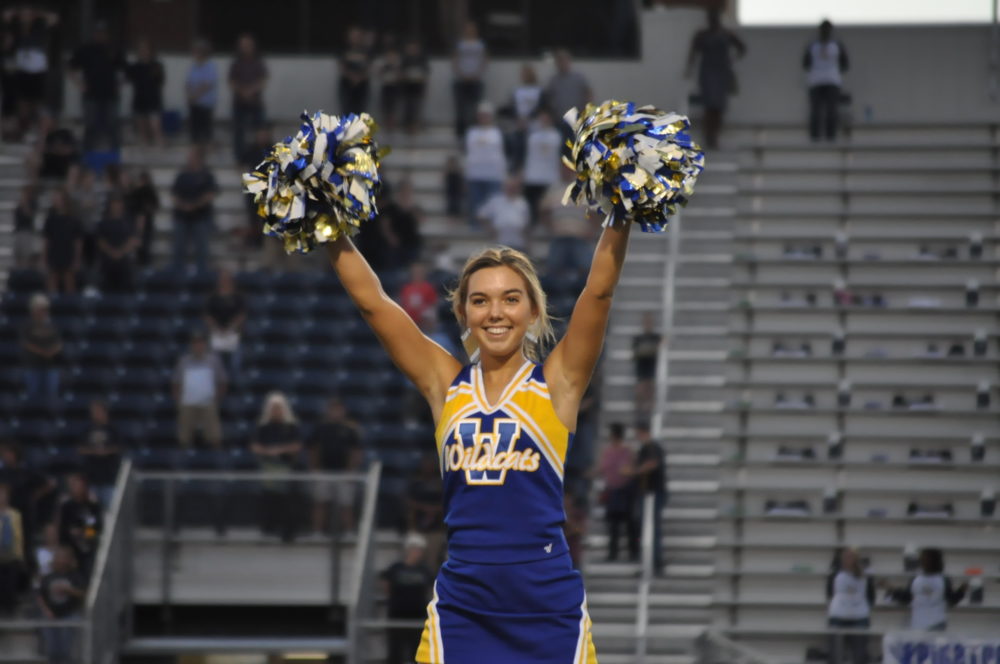