Shane Shepard, Community Development Director for the City of Sulphur Springs, Texas, was appointed last Friday as the Vice President of the Texas Downtown Association (TDA).  He was Treasurer in 2016.  TDA is the statewide organization that provides resources for downtowns throughout the state.  They have over 450 members from Main Street and non-Main Street cities.  “Between Winnsboro and Sulphur Springs, I’ve been a member since 2005,” said Shepard. He continued, “TDA provides a network of great professionals from small communities and large cities.  It has a played a core role in my career and strategies – I am honored to be appointed as Vice President”.

The appointment occurred on the heels of Shepard’s announcement that he is resigning his post in Sulphur Springs effective November 28th.  He accepted the position of Economic Development Director for the City of Lancaster, ten miles south of downtown Dallas.  Shane explained, “I absolutely love Sulphur Springs and it’s with a heavy heart I’m leaving; but I feel Lancaster is the next step on my journey of public service and feel compelled to answer the calling”. 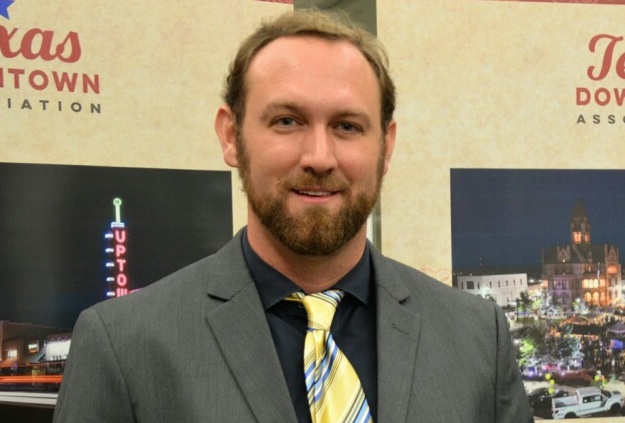 Shepard began service in Sulphur Springs in October of 2011.  He assisted in developing a business-friendly environment, marketing, a community branding effort, and downtown.  “Downtown has been a tremendous team effort,” says Shepard.  He continues, “The most effective and lasting business districts are efforts are done by teams and communities. We have a great City Manager and City Council; Capital Construction is absolutely amazing; Tourism has played a key role and I am personally proud of each member of the team in Community Development.”  He finished by saying, “… but the effort takes much more than City staff.  Local organizations, sponsors, businesses, citizens – everyone is essential!  It simply cannot work without community.”

Shepard indicated the City Manager, Marc Maxwell, was a mentor to him over the past five years. “Marc explained to me over and over again that if you love your community and you are in a public service position, you do what you can to create the magic for them.  It’s abundantly apparent how much he loves the community”.

On a personal note, this year was one of the toughest for Shepard. “I won’t go into the details of my personal life – we all run into rough spots at some point.  For me, it provided time to grow my faith, reflect and plan.”  Shepard explained that his self-introspection lead him to meditate over Matthew 7:7-8.  He said, “The reason for seeking, asking, and knocking is as important as the action – is it out of love or something lesser such as self gain, scapegoating or anger?  We are in an era where we are divided on our differences; however, we have an opportunity to celebrate similarities and be united. Instead of praying for the best, some desire ill-will when there are disagreements, misunderstandings, and mistakes.  Political beliefs have become as strong if not stronger than religious faith.  It’s dangerous and disappointing.  That being said, my parting words are this:  Do good without expecting gain.  Be fearless and faithful.  Let your journey be an act of love.”