The Wildcats’ football team battled Texas High all game long, staying close to the undefeated and state-ranked Tigers for most of the game at Tiger Stadium Friday night before finally losing, 23-10.

The game opened with offensive flourishes by both teams early before it settled down into a tough defensive struggle. On their first drive, Texas High scored on a short run by back Devuntay Walker to take a 7-0 lead. The Wildcats came right back as back Lawrence Worth scored on a 7 yard run to tie the game at 7-7. Tigers quarterback Cade Pearson threw an 8 yard TD pass to receiver Quan Hampton to give the Tigers a 14-7 lead in the first quarter.

Then as the defenses asserted themselves both teams could only manage a field goal in the second quarter.  Texas High’s Isidro Hennandez kicked a 29 yarder and the Wildcats Angel Tavera put one through the uprights from 22 yards out. Texas High led at the half, 17-10. Texas High managed the only second half score as Walker ran 69 yards for a touchdown late in the third quarter. Although the Wildcats did not score in the second half, they were throwing into the end zone as the game ended.

The Wildcats are 1-2 in district play and 2-5 overall. They have a bye next Friday before playing three opponents to determine who will be the small school seeds in the playoffs. 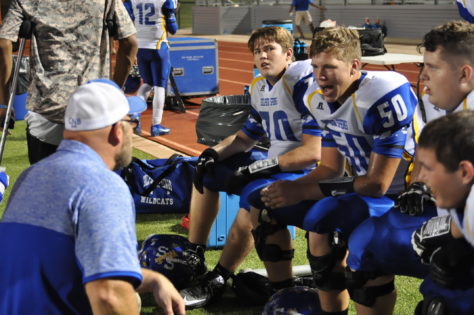 KSST is proud to be the official Wildcat and Lady Cat Station. We broadcast Sulphur Springs ISD games year round live on radio. When allowed, we also broadcast games via our YouTube channel.