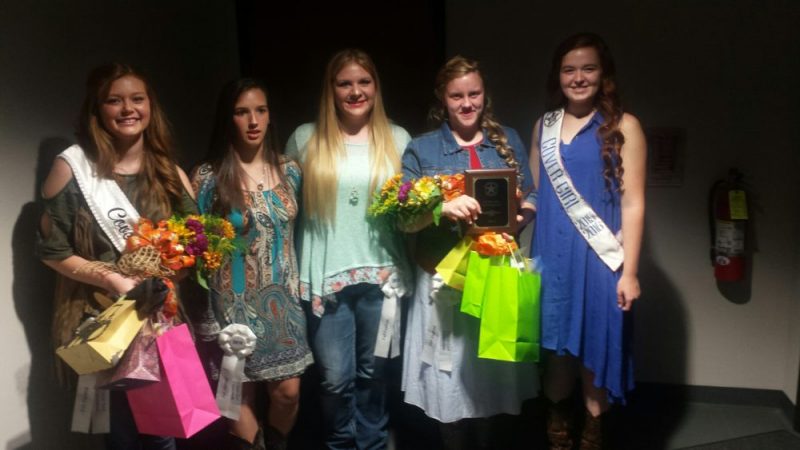 Maddie Peavler, the daughter of Amber and Ken Sharp, and Tim Peavler, is a Junior at Yantis High School was named Fall Festival Cover Girl Saturday evening on the final day of the event. She is the FFA Vice-President and on the Show Team ,  a Cheerleader, plays on the tennis team, and competes in UIL Feature Writing. She also works at the Brookshires in Emory. Maddie plans to go to college to become a dentist  or dental hygienist. She would love to go to Texas A&M University, but Baylor has a great Dental Program.

Named First Runner up and Miss Congeniality was Cami Froneberger, the daughter of Andrew and Jennifer Froneberger. Cami is a Junior at Miller Grove High School. She is involved with her youth group and volunteers at the Hopkins County Heritage Museum and Park. Cami plans to go to Texas A&M University to pursue a degree to become a Veterinarian.

Concluding her reign as Cover girl was Aleigh Bessonett, a Senior at Miller Grove High School. She is the daughter of Bill and Cherrie Bessonett. As a Lady Hornet, Aleigh participates in Cross Country, Basketball and Track. She is involved in National Honor Society,and 4-H, and is a member of the Brashear Baptist Youth Group. Aleigh would like to attend college to become a Social Worker or a Physical Therapist.  Aleigh’s mother Cherrie George Bessonett, was the 1985 Cover Girl winner. Aleigh and Cherrie are the first Mother – Daughter Cover Girl winners in the history of the contest.