The Lady Cats’ volleyball team played an aggressive game with a lot of solid attacks Friday as they took a 3-1 win at Texas High. The match featured two teams that were tied for second place in the district. The Lady Cats are now all alone there with a 6-2 district record. They are 27-9 for the season.

The score Friday was 25-16, 25-22, 21-25 and 25-18. Sheretta Hill led the Lady Cats with 13 kills while Autumn Tanton added 10, Abbi Baier 8, Kaylee Jefferson 7 and Mieke VanBenthem 5. Tori Moore provided 34 assists. Anden Hammack and Jefferson both had 14 digs each and Moore added 8. Tanton and VanBenthem had two block solos and Hill added one. The team recorded 16 block assists.

Lady Cats Volleyball Coach Justin Maness said the team’s net play offensively and defensively was strong. He said the team let one set get away from them but then he said they quickly rebounded. Coach Maness said Hill had two of her best hits of the season in set 4 adding that both were solid bangs in front of the 10 foot line. He concluded by saying Texas High is a tough place to play but added that it was nice to get a win on the road. 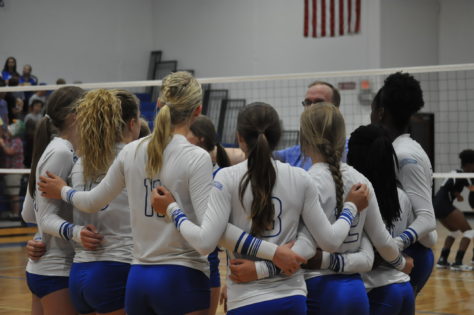