Here is the statistical picture for the Wildcats’ football team as they open district play Friday night. They have averaged 29.8 points per game and have allowed 44 points per game. Their season record is 1-3.

Looking at turnover plus and minus, the Wildcats have broken even. They have lost nine turnovers but also have claimed nine turnovers.

Safety D.J. Abron is tied for the district lead in interceptions with 2. Safety Austin Dodd and linebacker Jaxon Reneau are tied for fourth in district with 1 pick off each. Taylor is tied for eighth place in district points with 24 on 4 touchdowns.

Tavera is tenth in scoring with 19 points on 13 extra point kicks and two field goals. He is ranked as the district’s second kicker in scoring.

On defense, the leaders with total tackles and assists are Reneau with 26 and Tiesan Goodson with 25. The team sack leader is D’Idrec Dugan with 3. Five players have recovered a fumble: Terrell Turman, Dodd, Damiyon Dugan, D.J. Abron and Jose Rodriquez. 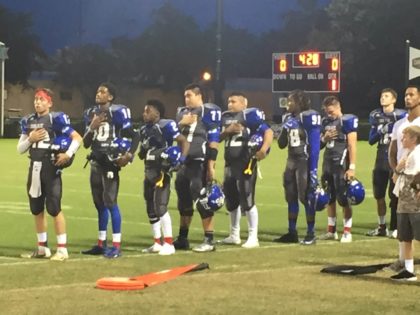