Wildcats Offensive Coordinator Matt Young said the victory over Pine Tree last Friday was a great win for the players. He said it was great to see hard work paying off. Coach Young appreciated the fact that the offense rallied after the team fell behind 14-0. He praised the play of wide receiver Tyrese Peters, who caught three touchdown passes. Coach Young added receiver Simeon Taylor had another solid game while quarterback Ryan Humphries had a very efficient night. Coach Young also said the offensive line played a solid game after coaches challenged them before the game. Concerning the Marshall defense the Wildcats will see this Friday night, Coach Young said the Mavericks are talented and big in the defensive front. He said they have a lot of players who like to hit you and he added their defensive scheme is sound. Coach Young said the offense would have their hands full Friday. He’s hoping for another consistent game from the offense. Coach Young sees the Marshall game as a measuring stick for the Wildcats to gauge how good they actually are against one of the district’s top teams.

Wildcats Defensive Coordinator Triston Abron and his assistant coaches resorted to a drastic measure last Friday against Pine Tree. Coach Abron said it became obvious early last Friday that the defensive game plan would not work against Pine Tree. The Pirates scored two early touchdowns to take a 14-0 lead. Coach Abron was convinced to scrap the game plan. The coaches put the players back in their base defense and came up with some automatics and adjustments that might be needed. The net result was a shutdown effort by the defense except for just one score in the second half. Coach Abron praised the players for making adjustments and the defensive coaches for making in-game changes. Coach Abron liked the job linebackers Easton Silman and Jaxon Reneau did during the game. He noted that the defense’s goal line stand was a huge play in the game. Marshall is next for the Wildcats and that means the Wildcats defense will have the almost impossible task of trying to stop the district’s leading rusher Cameron Haller. Coach Abron called Haller unbelievable and he added he was the most patient person he’s seen with a football in his hands. He said Haller waits for an opening and then he’s gone. Coach Abron said the defense must know where Haller is at all times. He said the Marshall offensive line is large and he added they are more athletic than the big Pine Tree line. Coach Abron said he has been impressed with some of the Marshall slot receivers and with some running backs other than Haller. 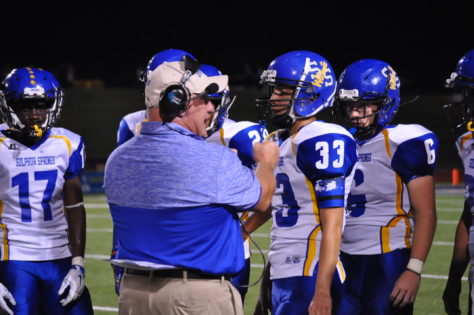