The Wildcats’ football staff is in agreement that Paris is a speedy team. At his weekly media gathering Wednesday morning, Wildcats Football Coach Greg Owens mentioned the fast Paris team and emphasized their quarterback, a running back, a wide receiver and some talented guys on defense. He said their technique is not where it needs to be because it’s early in the season but he added their athleticism makes up for a lot of that.

Coach Owens estimated that Paris appears to run about 70% of the time on offense. He said the Paris quarterback is especially dangerous when the pocket breaks down and he scrambles.

Coach Owens said the Wildcats staff is busy working on team problem areas. That includes some inconsistency on offense, giving up big plays on defense and some times of loss of focus. He said it would be very important for the Wildcats to tackle well Friday night.

Coach Owens said Paris is still a rival of the Wildcats but he admitted it is not what is was when the teams were in the same district. That hasn’t been the case since 2007. Still the teams’ players are familiar with each other and they play each other a lot at sub-varsity levels. 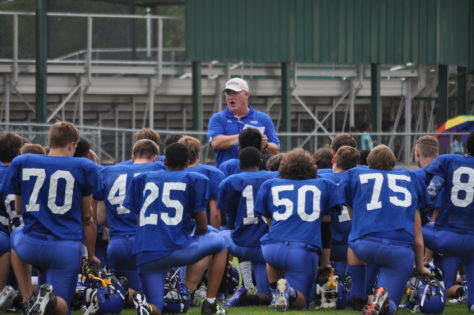