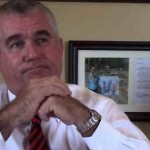 STREETS, WATER AND SEWER –   Water and sewer improvements on Bill Bradford Road are completed.  Atmos completed the replacement of the gas main.  The curb & gutter and street will be replaced next by a contractor.

DAVIS/TOMLINSON PARKING LOT – This project has been on hold for a couple of weeks while the Capital Construction crew has been working on the Jefferson Street parking lot.

JEFFERSON STREET PARKING LOT – The concrete work on this parking lot is nearly completed.  We will do the landscaping around the perimeter in October.  The new lot will have 77 spaces.  When the County opted into the Tax Increment Financing Reinvestment Zone #1 they committed to building the parking lot, and the City committed to beautification of the parking lot.

AIRPORT FUEL FARM – This project is completed. This project removed the underground AvGas and JetA fuel tanks and replaced them with above ground tanks and associated pumps and controls.  The total project cost is about $630,000.  The original engineering estimate was $1.2 million.  By breaking the bid up into its component parts and acting as prime contractor, we were able to cut the cost in half.

REVENUES AND EXPENDITURES – Finance Director Peter Karstens will present a year-to-date summary of revenues and expenditures.