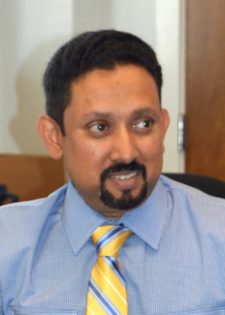 In his new role, Paramanantham will oversee the planning, design, building, operations and maintenance of the state transportation system for the Paris District, which is comprised of nine counties.

He graduated from the National Institute of Technology with a bachelor’s degree in civil engineering in 1990, and earned his master’s degree in structural engineering from Lamar University in 1993. Prior to his work with TxDOT, Paramanantham served as transportation planner for the Sherman-Denison Metropolitan Planning Organization.

Paramanantham began his TxDOT career in November 1995 as an engineering assistant for the Sherman Area Office in the Paris District. In 1999, he earned his professional engineering license and became design section manager for the Sherman office. In 2003 he was named assistant area engineer for the Sherman Area Office, a role he held until 2013. During that time, he oversaw the design and construction of the $50 million US 75 reconstruction project – the largest transportation project in the Paris District. He was also named Employee of the Year in 1997, and Engineer of the Year in 2001 for the district.