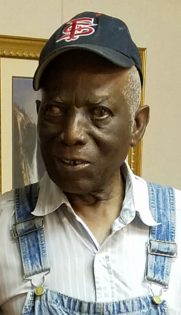 Otha Lee Jackson, age 82, of Emory, passed away Sunday, September 4, 2016, at his home. Funeral service is scheduled for Saturday, September 10, at 11:00 AM, at Wilson-Orwosky Funeral Home Chapel with Rev. R. R. Martin and Rev. Bobby Thomas officiating. Visitation will be held one hour prior to the service at 10:00 AM. Burial will be at Prairie Grove Cemetery.

Otha Lee Jackson also known as “Pill”, “Gus”, and “Pilican” was born on May 3, 1934, in Emory, to Haywood and Gracie Givens Jackson.  He married Betty Jean Boyd in Lone Oak on February 15, 1954.  To this 50 year union was born six wonderful children.  Mr. Jackson worked hard most all of his life doing highway construction work.  He was a member of Mt. Gilead Baptist Church in Lone Oak.