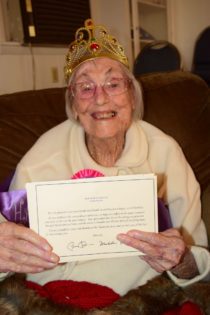 Alice Marie Sissel, age 100, of Emory, passed away Friday, September 23, 2016, at her granddaughters home in Alba. Funeral service is scheduled for 10:00 AM, Monday, September 26, 2016, at Wilson-Orwosky Funeral Home of Emory with Bro. Wayne Wolfe and Bro. Billy Smith officiating. Interment will follow at Pilgrim Rest Cemetery #1.  Visitation will be Sunday, September 25, 6-8 pm at the funeral home.

Alice was born on January 25, 1916, in Emory (Willow Springs Community) to Lewis and Addie Creel Clewis.  She married Eugene Wolfe in Rains County in 1933.  She was a homemaker most of her life and she also worked as a cook in several places throughout the years.  Memaw was full of foolishness and she tried to enjoy life wherever she was!  She had an abundance of the most sincere love of family that you would ever know!