Coach Owens said Friday night’s 43-42 win over Sherman was one where Wildcats’ players fought through struggles developing their character. He added they also had fun and it showed throughout the night. Coach Owens said the game featured a roller coaster of emotions. He said the Wildcats have good team chemistry this year and like each other.

Coach Owens praised the large offensive line for making the running game go. The Wildcats featured four running backs and all scored a touchdown. His biggest surprise was the play of Searn Rodgers, the Wildcats leading rusher. Coach Owens noted he also had a great spring. The coach said he had never seen back Jaylon Hawkins run better. He marveled over a 17-play drive the Wildcats had.

He said quarterback Ryan Humphries played an exceptional game and was extremely accurate. Coach Owens said receivers were solid. He said there were two exceptional catches, both touchdowns, that went to Landry Tyson and to Simeon Taylor. Coach Owens said he was really excited about the offense Friday night. He said Offensive Coordinator Matt Young kept the Bearcats off balance during the game.

The 1-0 Wildcats will now take an historic road trip. They’ll play Seminole Ridge, Florida Friday night at 7 p.m. at ESPN’s Wide World of Sports Stadium located at Disney World in Orlando, Florida. The Wildcats JV will play another school at 10 a.m. Friday on the same field. KSST Radio will bring you all the action of the varsity game Friday night. 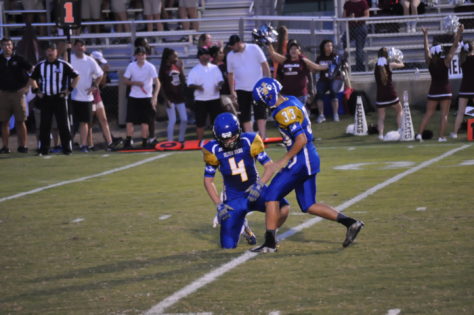