Wildcats Offensive Coordinator Matt Young said he learned some things about the Wildcats’ offense in the Sulphur Springs, 43-42 win over Sherman at Gerald Prim Stadium last Friday night. Coach Young said he was pleased watching the offense play and make plays. Ironically, he said a poor third quarter that featured few Wildcats snaps might have helped some players last through the entire game. Several players had cramping issues that threatened to shut them down early before the light third quarter. Coach Young liked the physical play by the offense and their fast tempo. Running backs really stepped up. Coach Young said he had never seen Jaylon Hawkins run better. Searn Rodgers, about fourth on the depth chart was expected to get five or ten carries at the most. He ended up with about 20 as he gained 150 yards. With some depth, Coach Young wondered who might be the next receiver to have a big day and make lots of catches. Landry Tyson and Simeon Taylor both had big TD grabs for the Wildcats Friday night. Coach Young had this scouting report for Seminole Ridge of Florida, who the Wildcats play Friday at 7 p.m. at ESPN’s Wide World of Sports Stadium at Disney World in Orlando, Florida. Coach Young said the Seminole Ridge defensive scheme is similar to Sherman’s except the Hawks are mostly smaller and faster. The Hawks do have size at linebacker. Coach Young said they have speed in the secondary and said the entire defense does a good job of running to the football. He said they will present a challenge to the Wildcats who he said would have to pay attention to details. Coach Young is hoping for another physical and fast evening on offense.

Even though the Wildcats’ defense allowed 42 points last Friday night, Wildcats Defensive Coordinator Triston Abron said he was excited by the way the defense competed and played. They did give up several big plays for scores. Coach Abron said defenders must continue to read their keys properly and be in the right spots. He said if they do, it should make it hard for offenses to move the football. The Wildcats’ defense did hold Sherman scoreless in the fourth quarter coming up with some big stops and turnovers. Coach Abron also liked the way the defense tackled Friday night. He said the players and coaches are both trying to learn a new scheme, the 3-4 defense. In a blast from the past, this Friday night , Seminole Ridge is expected to run an old school slot T formation set that will feature motion, pulling linemen and misdirection. Coach Abron described it as smash mouth, in your face and coming right at you. He added not a lot of people are running an offense like this anymore. 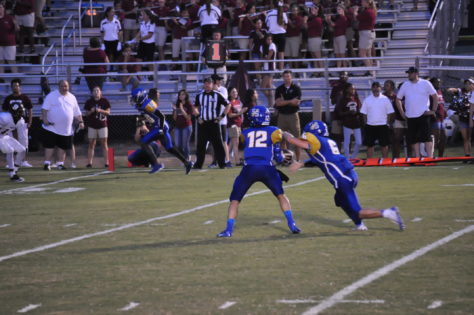