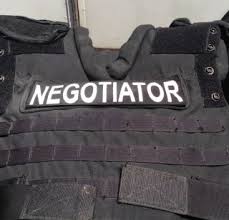 A regional training for 25 law enforcement officers from across Northeast and Central Texas is being conducted at the Hopkins County Sheriff’s Office Squad Room this week. The training was initiated by the local Texas Ranger and is utilizing the skills of highly successful experienced educators in the field of negotiation.

Retired FBI Special Agent Max Howard told KSST News the negotiations process was discovered and refined in the 1960’s as law enforcement dealt with those who were seeking to achieve a goal outside themselves and attempted to obtain that goal by holding people hostages or placed themselves in circumstances that demanded authorities help them to attain the goal. He stated that negotiations today are different. People today are often dealing with emotions and personal problems. The negotiator must now bring the person down to a level where they can deal with the emotional need, frustration or pain. Howard stated that listening and learning from the individual assists to determine the solution to their need. If they are suicidal, finding alternative relief will avoid them hurting themselves or others.

Coping skills are not as plentiful and available to the individual in today’s society as in days past. He said emotions play a greater role now than in the past.

The skills learned by officers during this week will not only assist them in dealing with work related negotiations but also have influence in the personal life of each officer, according to Howard. He stated that those who receive the training are able to better interact with family as well as  the everyday circumstances faced in private and public life.