Before we get started, I wanted to say that this is the last part of my updates about Australia. I hope you’ve enjoyed reading them as much as I have enjoyed writing them! If you missed any of the previous articles make sure you catch up! Click here for part1, part2, part3, or part4!

Do you enjoy trying new food? I can be adventurous when I want to (but that isn’t often). However, when we were in Australia, it was almost like I was a new person. I tried almost everything (I drew the line at kangaroo meat). Some of it was worth it, others well…not so much. I’ll start with the best and work my way to the worst. Warning! This post may cause you to become hungry! 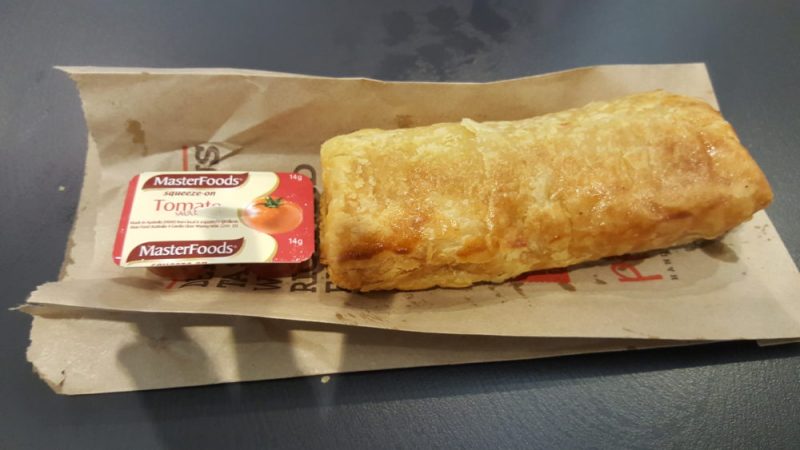 Sausage Rolls-These were possibly the most amazing things I have ever eaten. Originally intended as breakfast, but they are also a popular snack, and could be eaten all day. Sausage Rolls are kind of similar to Sausage Kolaches in how they both have meat in bread, but I found that I liked these a lot better than Kolaches. They have ground pork or beef mixed with spices rolled in a puff pastry. Some of the local shops sprinkled sesame seeds on top, but most left them plain. I tried them with (how locals eat it) and without ketchup-I liked it better with ketchup, as it added a little bit of saltiness. 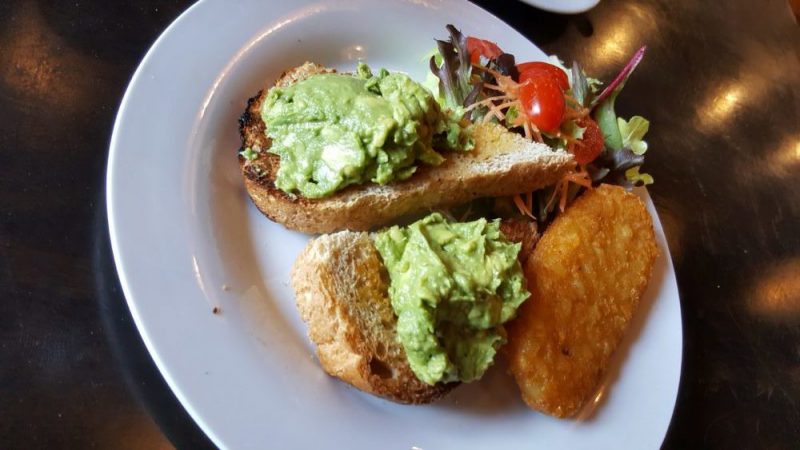 Avocado Smash-In Australia, Avocado is used more as a spread than a snack. For breakfast they would mash up an avocado with  feta cheese and a little bit of lemon juice. They would then smear it onto toast, and add a little bit of salt. And I know what you’re thinking: “Avocado for breakfast?! She’s crazy!” But I’m not. It is amazing and actually gives you a lot of energy for the day! Try it! 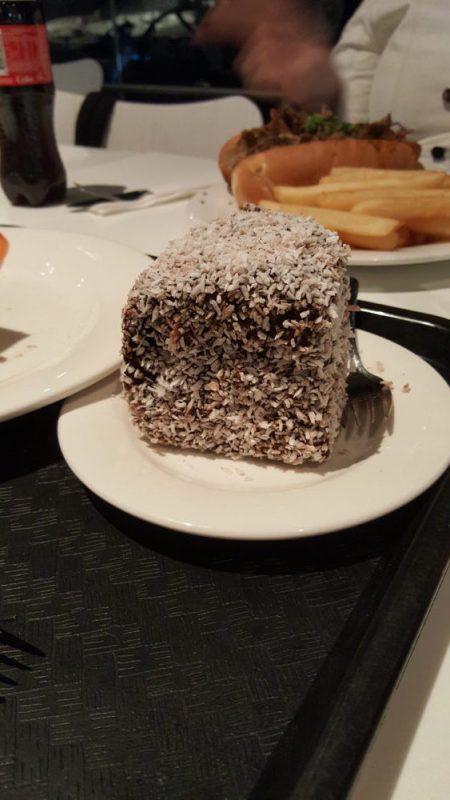 Lamington-The dessert of all desserts…That is if you like coconut and chocolate coating a soft vanilla sponge cake. Rumor has it that Queensland’s eighth Governor Lord Lamington’s maid-servant accidentally dropped the Governors favorite sponge cake in a pot of melted chocolate. Not one to waste food, he suggested to coat it in coconut to avoid the messy chocolate from getting everywhere. The successful cake being his legacy, despite him serving for five years…after trying the Lamington, I think It would be a pretty tasty thing to be remembered by.

Original Tim Tams-Oh my deliciousness! Stop what you’re doing and order some. They are seriously that good. A combination of chocolate, a crispy graham cracker-cookie, and a little bit of melty chocolate creme that creates heaven in each bite. 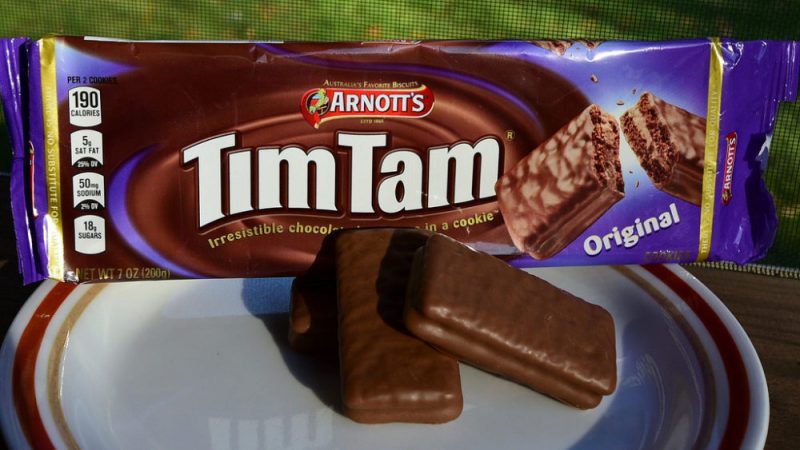 Okay, so maybe that was a slight exaggeration, but they are still ridiculously tasty. My aunt recommends dipping them in milk, but they taste just as good plain. If you haven’t ordered your Tim Tams yet, make sure you definitely try them. You won’t regret it. They are that amazing. 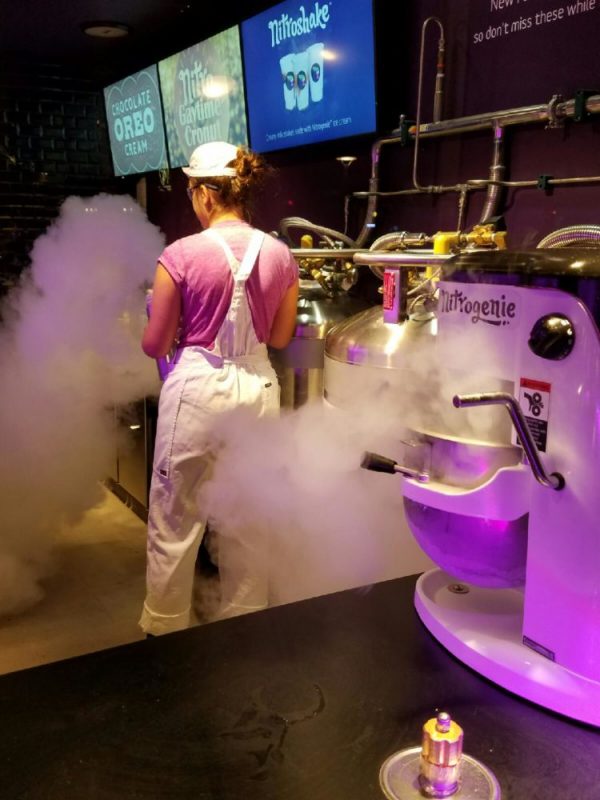 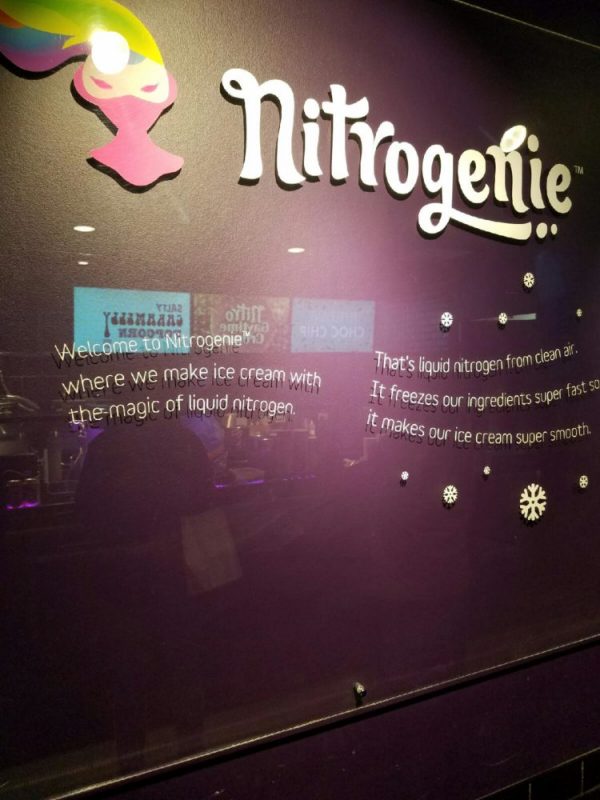 Amazingly, at this ice cream shop, they make your ice cream with liquid nitrogen. One of the workers explained that they put Vaseline on their hands, and they wear gloves to make sure they don’t get burned from the extreme cold-basically unless they stick their hand into the barrel of nitrogen they are safe. Not to mention how cool it looks when the nitrogen air flows out of the mixers! This one was too cool (literally and figuratively)
to not try even if it was in the winter! 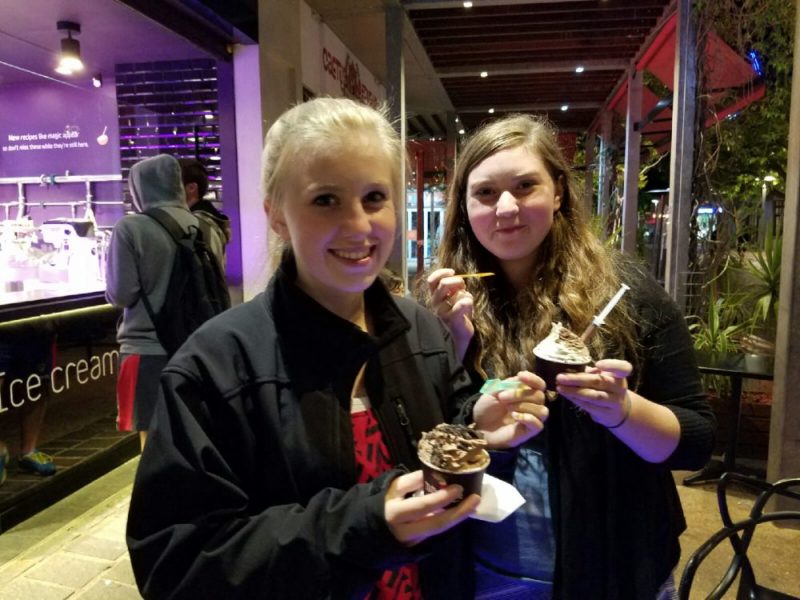 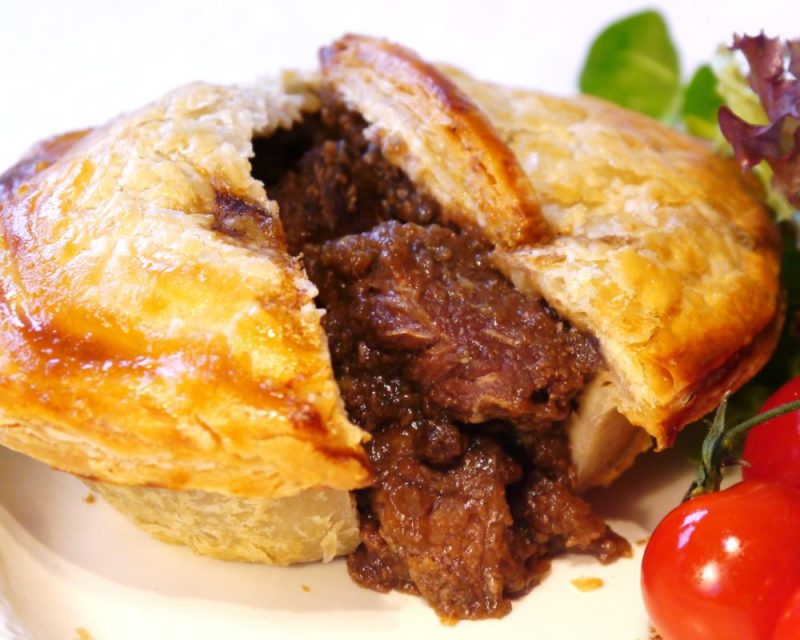 Pepper and Steak Pie- Okay, this one was almost delicious, but I found that at some places the pepper was often slightly over powering, and for someone who doesn’t like a lot of pepper, I had to put it in the average category. Don’t get me wrong, the steak bites and the pastry crust was really tasty! It just had a lot of pepper… (What did I expect? It’s in the name…) Pies are really popular in Australia. They eat them for Breakfast, Lunch and Dinner! They are kind of similar to chicken pot pies, and they are more savory than sweet. 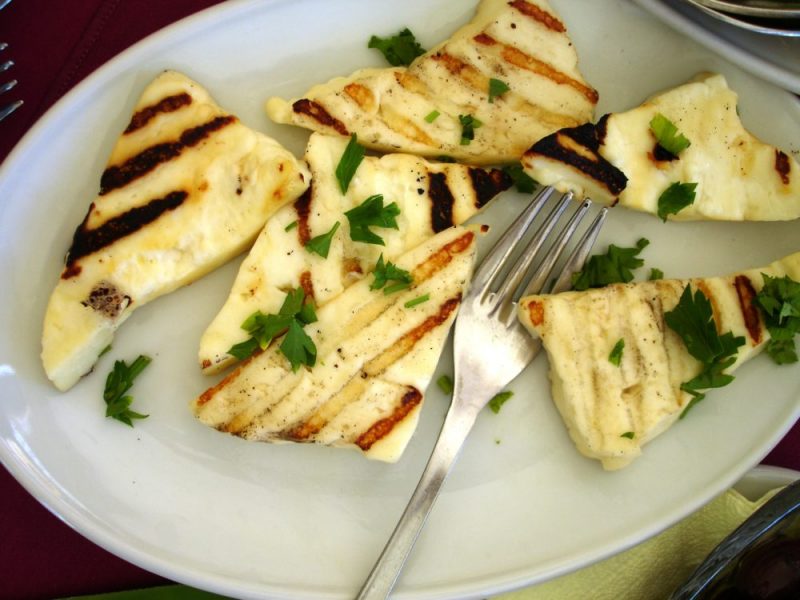 Grilled Halloumi Cheese-The flavors of this cheese are awesome, think smokey mozzarella. Halloumi is typically made from goat’s milk or sheep’s milk and served as an appetizer. But what knocked this one from the delicious category was the squeaky sound it made when you ate it. I know… it sounds weird, and its kind of hard to describe but essentially when you ate the cheese it sounded like someone washing windows. If you think I’m joking, try it, my entire family started calling it “The Squeaky Cheese” because of the odd consistency and squeakiness.

Cherry Ripe-This is a popular candy bar in Australia. Essentially someone has found a way to take chocolate covered Queen Anne’s Cherries and turn them into a chocolate bar. So while the name is odd, and the chocolate isn’t Hershey’s, it’s still something I would eat again. 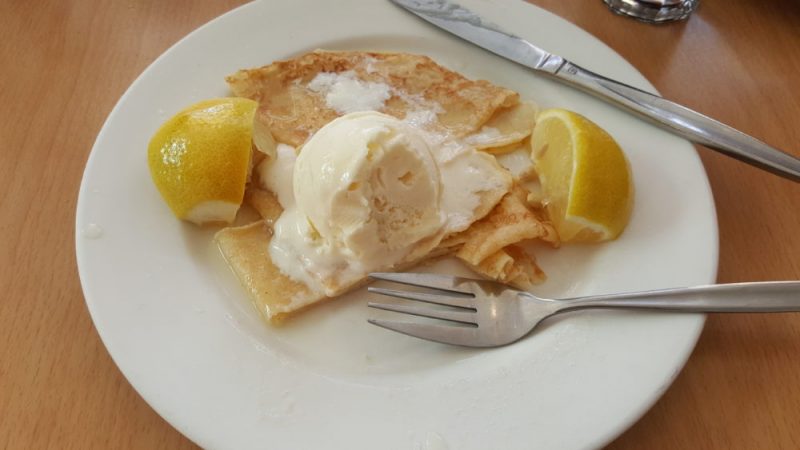 Lemon Sugar Crepes-They were delicious but while I ate them for breakfast, Australians eat them for dessert. If I’m being totally honest ice cream for breakfast is just odd. (You were right Mom and Dad.) So I guess this one was more on me, but at the same time the lemon to sugar ratio was off making it a little too sour. It wasn’t bad for breakfast, maybe just a once every two years kind of breakfast. 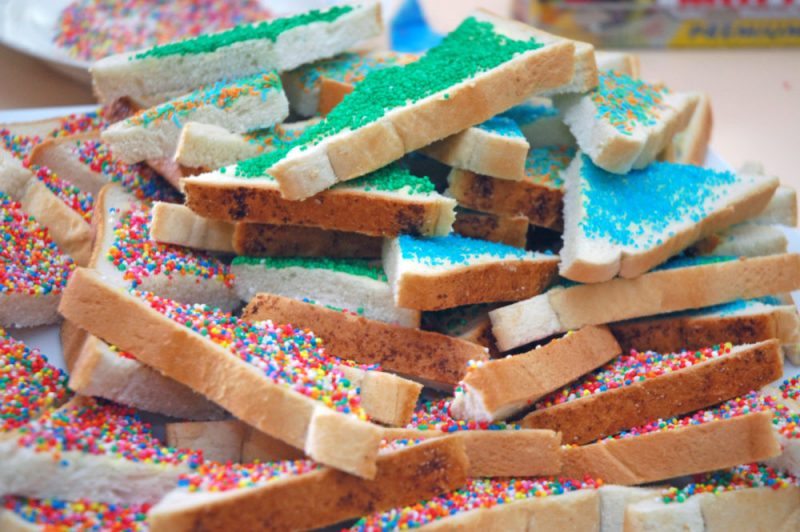 I didn’t know this was an Australian dish until recently. I mean hasn’t everyone had toast with butter and sprinkles or sugar at some point in their life? Australians typically eat this at parties, but I thought it was a fancy version of toast, like cinnamon and sugar on your toast. It’s good, but average.

Just Plain Weird (aka DO NOT TRY OR YOU WILL REGRET): 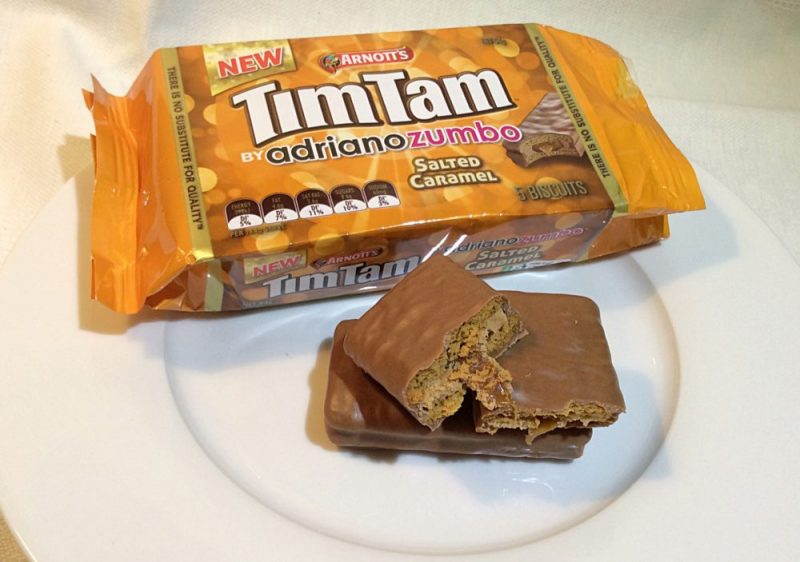 Salted Caramel Tim Tams-Not as good as the Originals. Where the originals have a chocolate creme, these have an extra layer of salted caramel in the middle. It sounds good, but I found these almost too sweet…So these actually aren’t that bad, I just needed something else to go in this category. You can try these without regretting it. 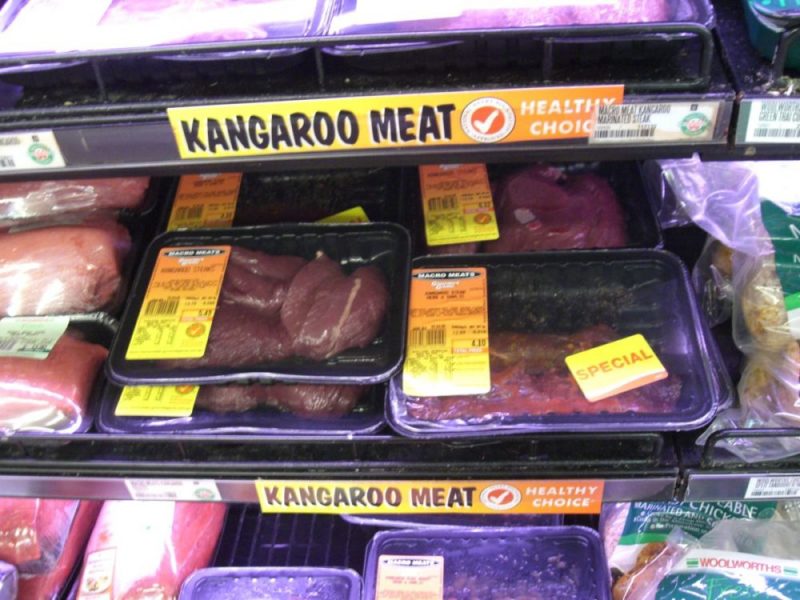 Like I said in the intro, I didn’t try it. I guess I wasn’t very adventurous that day. My aunt had ordered some and my dad tried it, but I refused, along with my mom and sister. Don’t kill Kanga. 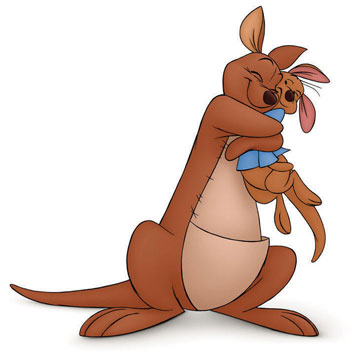 Think of all the Roos. (Sorry I couldn’t help myself.) In all seriousness, my aunt liked it, but my dad thought it was okay. He said “It tastes a little like deer, but the consistency is a little stringy to me.” Also I’m not saying that Kangaroos can tell if you’ve tried Kangaroo meat, but we went for a walk in a nature preserve and everyone but my dad saw the kangaroo-she bounded off before he could come back down the hill to where we stood at the bottom. Coincidence? I think not! 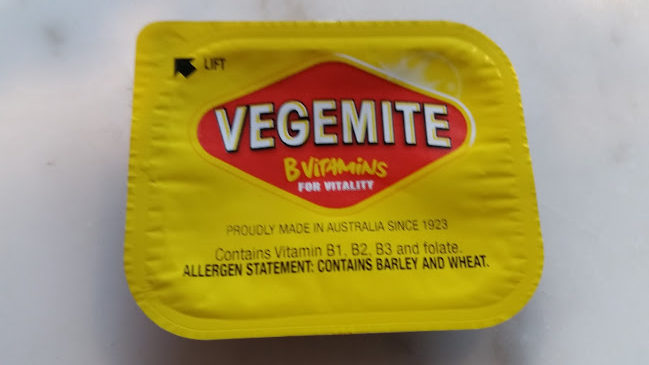 Vegemite-Before I tell you how it tastes (although I’m sure you can infer since its in the weird category), let me explain what Vegemite is. Vegemite quite simply is a yeast spread. (It gets better.) Made from the leftover brewers yeast extract mixed with vegetables and spices. Basically they scrape the bottom of beer barrels and mix it with some spices and vegetables. Don’t get me wrong it is full of vitamin B. It looks dark brown (almost black). 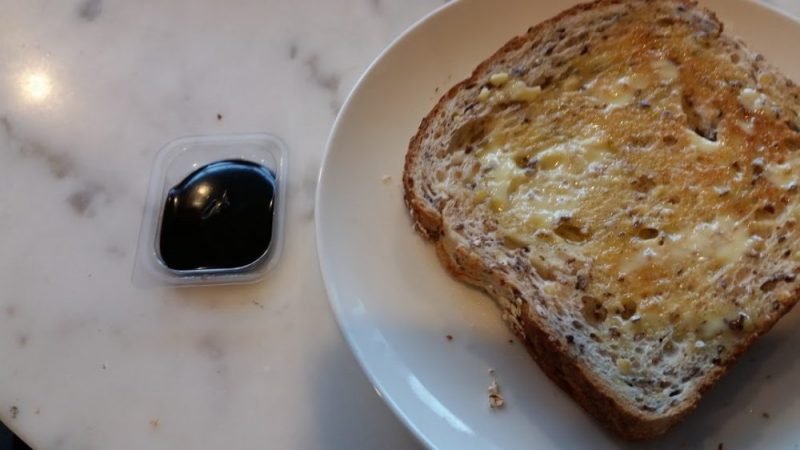 I thought it looked kind of like chocolate.  Now you don’t typically eat it by itself. Most Aussies put a little bit on buttered toast. (How I tried it.) Knowing that most Australians use it almost as a peanut butter or jelly, I naively thought it would be sweet. Long story short it wasn’t. This vile spread masquerading as a jam was salty. And not a good salty, like actual salt, but a someone-please-help-me-get-this-salty-bitterness-that-tastes-like-old-lunch-meat-out-of-my-mouth salty. Overall, if you travel to Australia thinking it would be fun to try Vegemite, let me save your taste-buds the anguish, don’t try it.

Here’s a video of me trying Vegemite. It was gross…Don’t Laugh.

Thanks for reading! I hope you enjoyed learning about Australia! (Tip! If you hit the full screen button the video gets a little smaller)