Welcome back to Brisbane! This city had so much to do I couldn’t fit it all in one article! Last time we talked about the Anzac War Memorial in Canberra, Lady Musgrave Island in the Great Barrier Reef, and two of the most popular and famous Zoos in Australia. If you’d like to read one of my previous articles click here for: Part 1, Part 2, or Part 3. This time I’m going to talk about some cool things to do inside the city center. Before we start, here’s a fun tidbit! Just about everywhere in Australia shuts down at 5:30 pm. The only places that stay open are usually only restaurants and a few movie theaters. So if you’re planning a trip to Australia anytime soon, know that you’ll be eating around 5:30 pm, or 6:00 pm because the shops are very prompt in their closing times. That being said, let’s take a look at some of the places and things to do during the day! 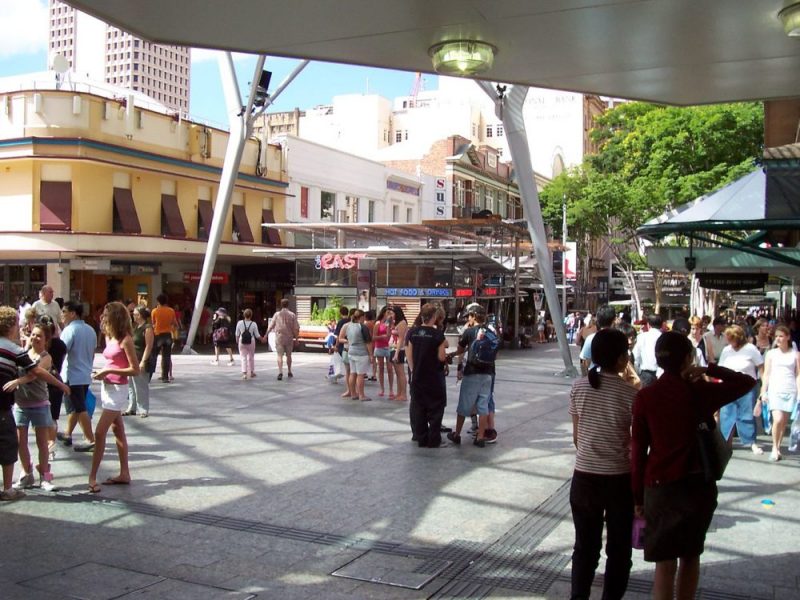 -This outdoor mall stretched across half the city. Modern shops, Book stores, and lots of restaurants added to the city aura. There was a really interesting and good restaurant called “Jimmy’s on the Mall” that was completely outdoors. 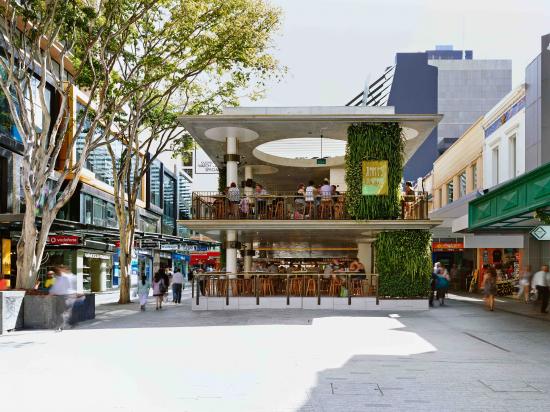 The food was delicious, but it was slightly terrifying to be sitting on a bench where you could fall backwards into the walkways-nevertheless it was fun. The mall housed both western stores and local stores. They had a bookstore called Dymock’s which was similar to Barns and Noble here. One thing that really surprised me was the window displays. Almost every shop had an awesome window display, and it was obvious the workers had put a lot of time into creating them. 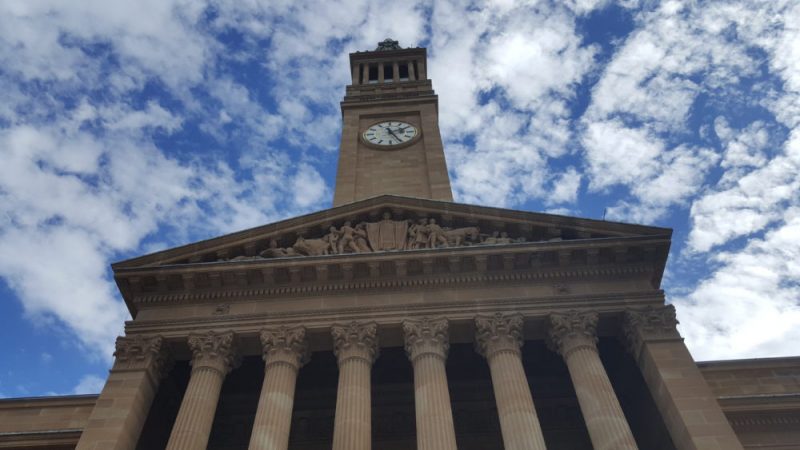 When planning my trip I didn’t realize that these were in the same building! It was pretty funny when we found the Parliament House and saw the signs for the museum. The museum had multiple exhibits including a section on the War history, how Brisbane was created on the river, and a section on the people and inhabitants of Brisbane. It really focused on how diverse the city was, and the people that make the city their own. They had quizzes and questionnaires so that visitors could add their personal views and stories to the museum. Also an odd item they had was “scents” of the city. They had quotes from locals about their favorite city smells-and they recreated these smells to go with each quote in a large tube container you could smell them in. They also had the city smells bottled as perfumes that you could purchase! While we were in the Parliament House, we also got to free tickets to view the inside of the clock tower. 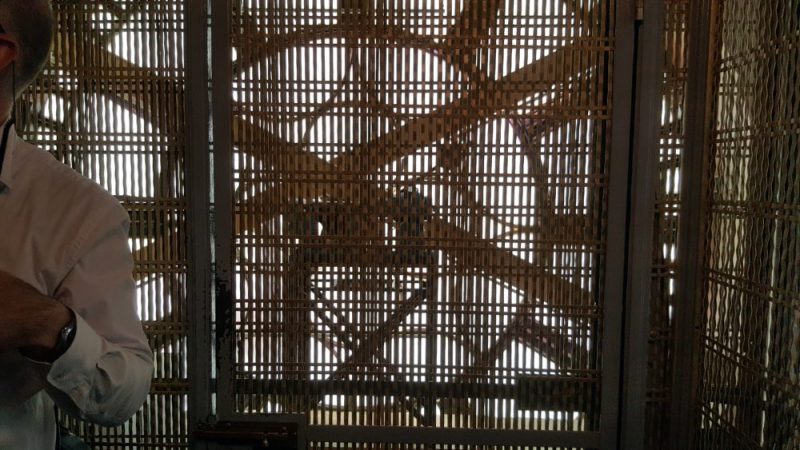 It was unbelievably cool to not only see the working parts of the clock but also see out over the city and even view the Queen Street Mall. The view stretched out to the far corners in every direction. I found it interesting that inside the tower the bell is muted and barely audible, but when you’re outside the tower the bells echo around the city. 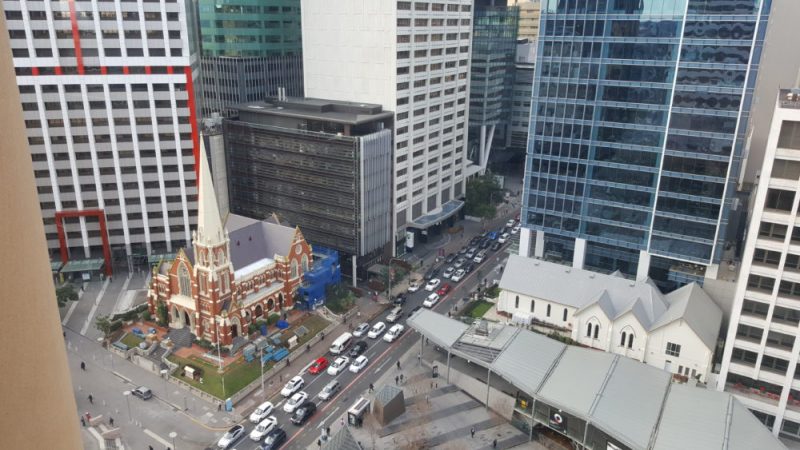 The Brisbane Tramway Museum-Have you ever wanted to ride Trams (similar to a Trolley Car) and learn about transportation in the early 1900’s? The Tramway museum allowed us to ride 6 trams starting with the oldest one and working the way up to the most recently created one. 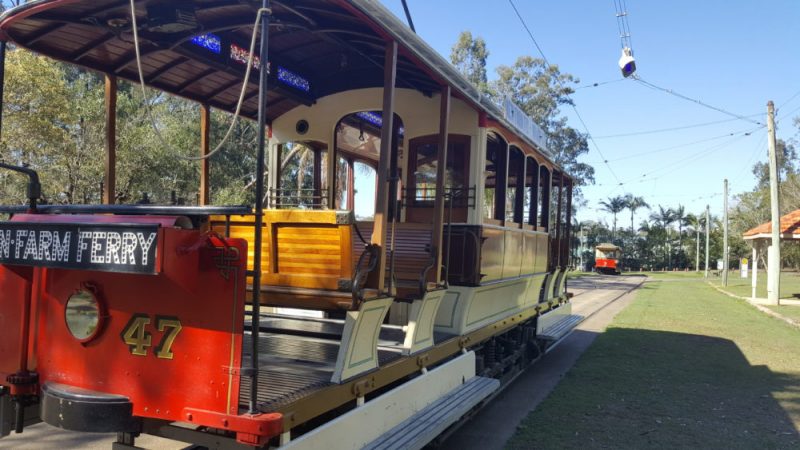 The museum workers even dressed up as an authentic Conductor and Motorman, asking for our tickets each time we switched Trams. While we were visiting, Remembering Brisbane Tramway’s worker, Paul Campbell, was there and he shared his past about how his father Theodore (Jim) Campbell worked as a mechanic on the trams in Brisbane until they were shut down. Paul remembered going to work with his dad a few times and said he has always enjoyed the trams. Now that he is grown he enjoys visiting the museum regularly with his wife and son. 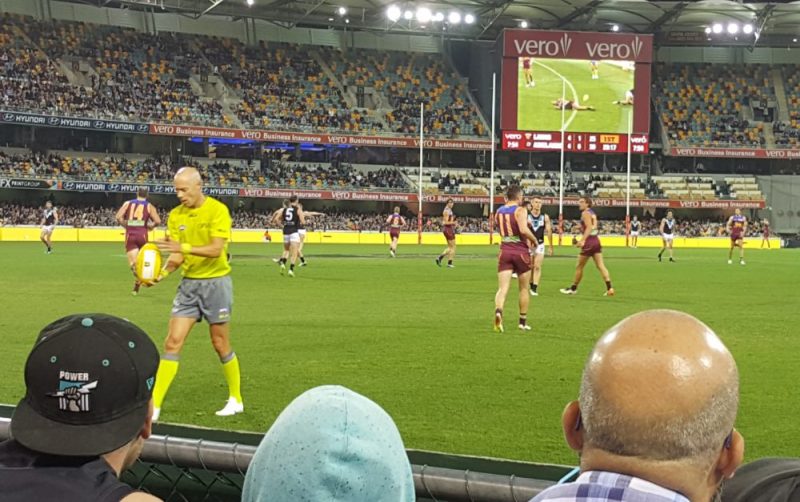 The object of the game is to throw or kick the ball though 1 of 3 goal posts. If it goes between the 2 outer goals or hits the goal post the teams score 1 point, and if it goes between the middle goal the team scores 6 points. In America, typically there is a huge rivalry between teams, in any sport. In Australia, there was a rivalry, but the crowd never got rough or ugly. The fans were all mixed together-it wasn’t specific sides for each team, but the opposing fans were very cordial. I think the worst things I heard shouted were: “Power Sucks!” (But that was only after the other team had a 100+ point lead) and “I hate your arm!” (After a player made a particularly good one-armed catch.) Other than a few fights that broke out between the players the game was clean, and exciting to watch. 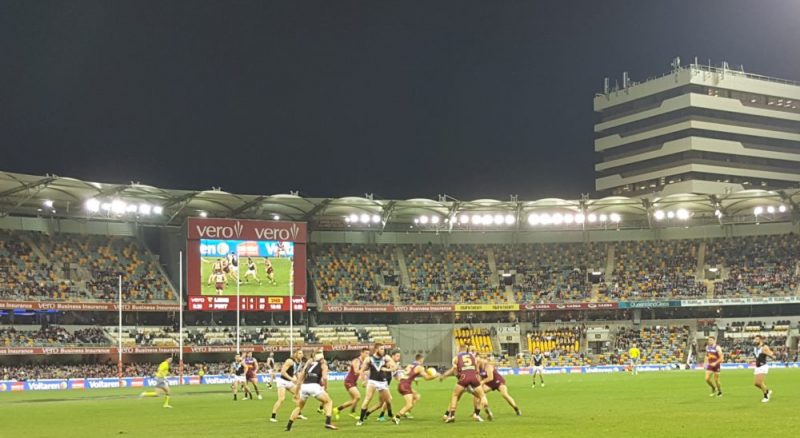 The Brisbane Lions unfortunately lost, and the opposing team, the Port Adelaide Power happened to make the highest score and largest winning margin outside of South Australia for this season. Even though we lost it was still a really fun opportunity and I am glad we attended the game.

That’s all for now! I hope you’re enjoying these articles, and learning as much as I did when we went! Stay tuned for part 5 which will be about the delicious, average, and just plain weird food options in Australia.