The Life Of The Sloth!

Home » Headlines » The Life Of The Sloth!

Sloths are the adorable and lethargic animals living in treetops, they depend on the health and survival of Central and South American tropical forests. They spend much of their lives in the canopy, snoozing and remaining hidden from predators. The animals live solitary lives and travel from tree to tree using canopy vines. Located in places such as Brazil and Panama, this strange and wonderful animal need healthy forests to survive. 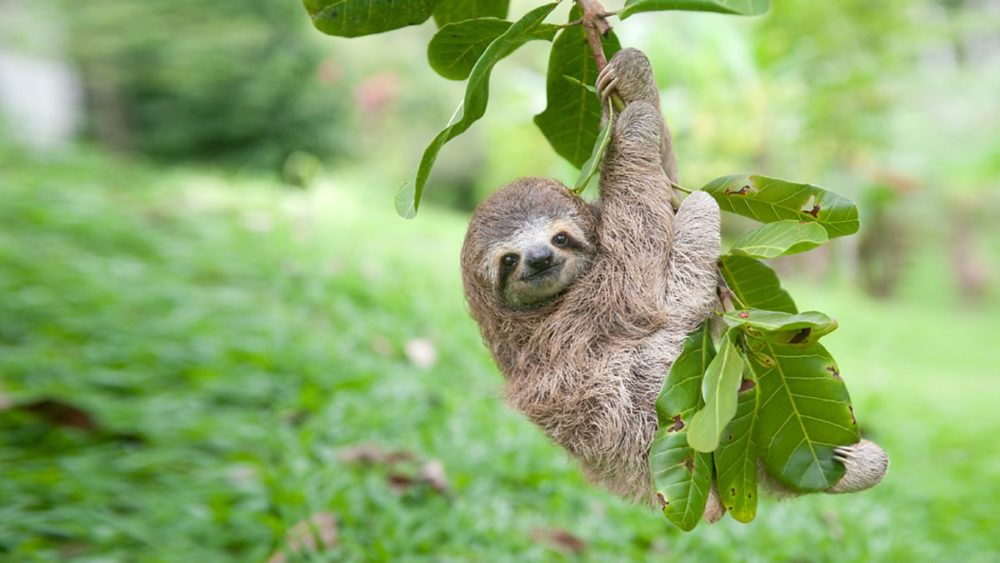 The first question you can ask is why are sloths so slow? Well, Sloths have an extremely low metabolic rate, which means they move at a sluggish pace through the trees. Sloths move slowly because of their herbivorous diet, slow metabolism and small muscle mass. Sloths are able to move fast, but they have to burn an enormous amount of energy in order to do so. The sloth diet lacks fats and proteins, which are important sources of energy and nutrition. On average, sloths travel 41 yards per day, which is less than half the length of a football field! 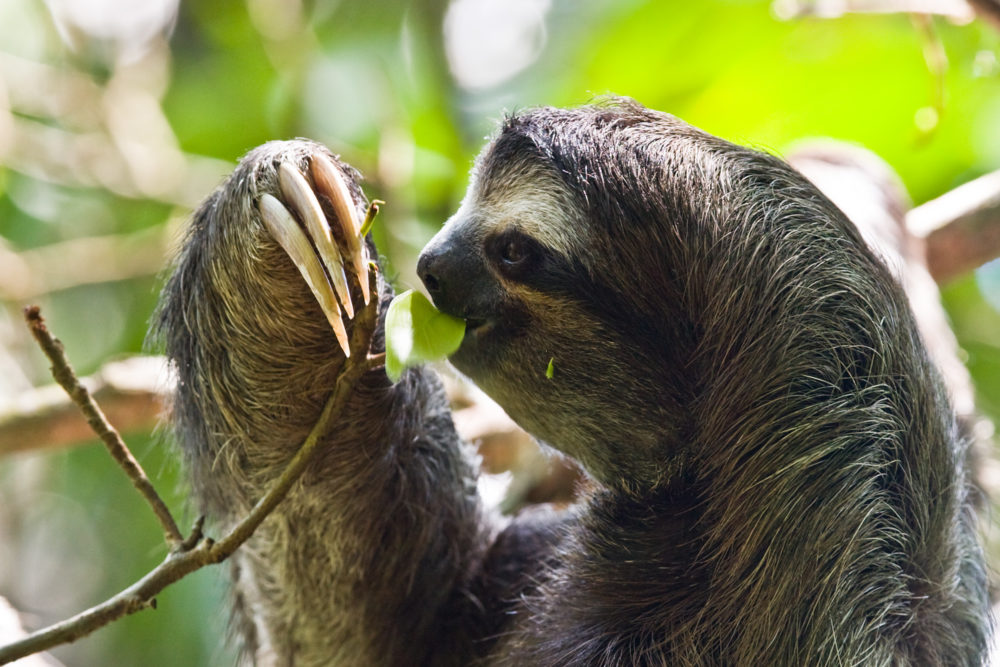 Female sloths give birth to one baby a year after a gestation period of six months. The baby sticks with the mother for about six months, clinging to its mom’s belly as she moves through the trees. This is an important bonding period that helps the offspring learn and develop. When the sloth leaves its mom after about six months, it adopts part of its mother’s range, continuing to communicate with the parent through calls. 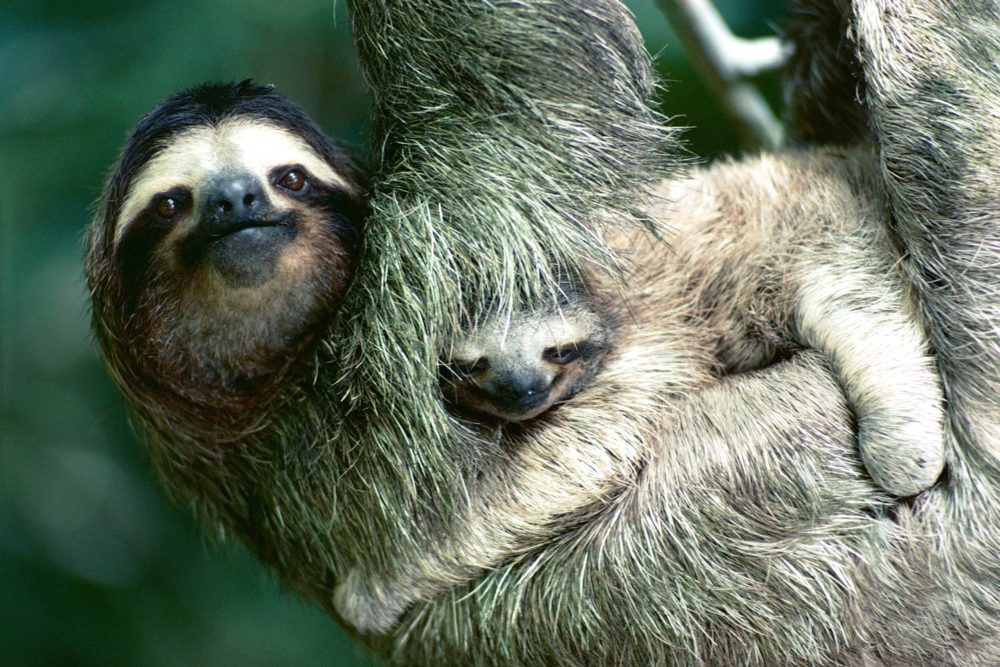 They move so slowly, algae and fungi have enough time to grow on their long hair, as they hang from the trees. Instead of washing the algae away, sloths use it to feed their young and it also doubles up as an effective green camouflage for the tree-dwelling creatures. 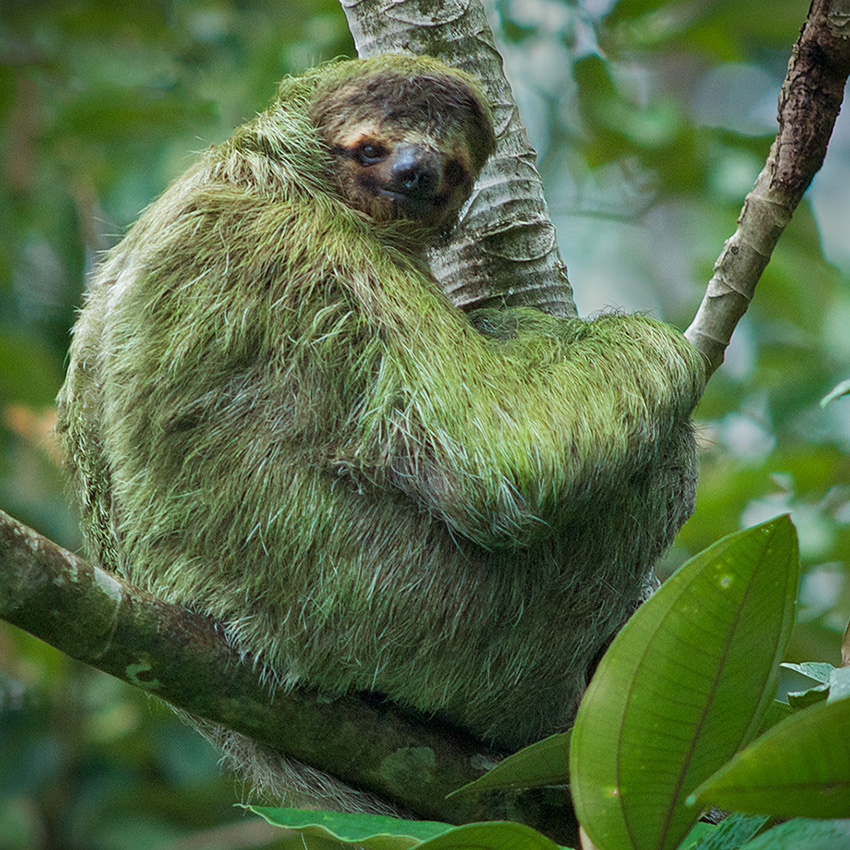 Sloths snooze for about 15 hours per day. That leaves only nine hours to lumber through the trees. They maintain a low body temperature of about 30-34 degrees Celsius, and move in and out of shade to regulate their body temperature. Sloths eat on leaves, twigs and buds of plants. Because the animals don’t have incisors (the teeth that help chew foods), they trim down leaves by smacking their firm lips together. A low metabolic rate means sloths can survive on relatively little food; it takes days for them to process what other animals can digest in a matter of hours.

Surprisingly, sloths are great swimmers. They will sometimes drop down from their treetop perches into water and use their extended arms to propel through the water. Sloths spend most of their time up in the trees, coming down only one time per week to relieve themselves. The trees provide a natural protection from predators such as jaguars and eagles; it’s safer for sloths to remain motionless and camouflaged off the ground. They will, however, venture down sometimes to find more food or a mate. 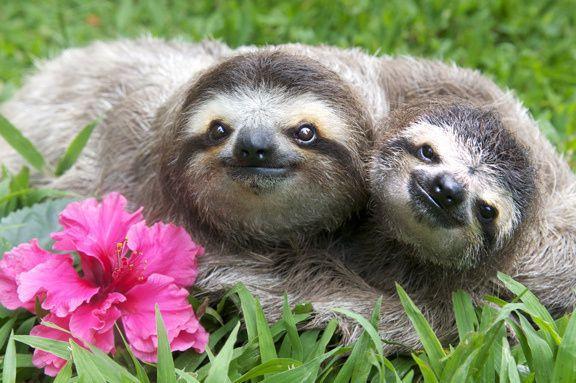