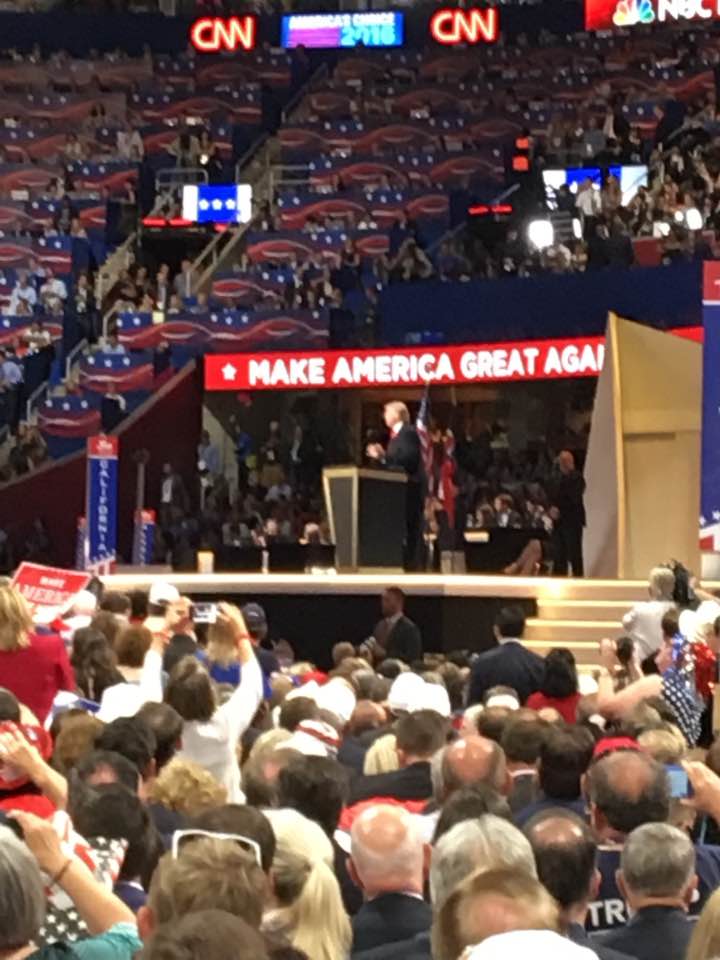 The final night of the Republican National Convention in Cleveland found the Texas Delegation seating changed and Hopkins County’s Donnie Wisenbaker found himself seated behind the Colorado delegation but with a better view of the speaker’s podium.  The final night of the convention focused on the party’s nominee for President, Donald J. Trump.

Wisenbaker praised speeches made by Trump’s daughter as well as Trump. He stated that Trump had people on their feet with his populist speech. He noted that Trump and other speakers Thursday evening were seeking to secure the vote of women. “If he can accomplish 50% of what he says he wants, it will be wonderful for our nation.” He hopes Trump will stay on point and not allow distractions to defeat his message and campaign. Wisenbaker said that he hoped Trump would negotiate with countries that he says are cheating our nation. He said only one protester found their way inside the convention area but was soon dispatched by security.  Outside the convention center, no protestors were to be found within two blocks of the arena.

Now that the convention has concluded and he is making his way home, Wisenbaker noted that he would love to go to the next national convention. He stated that with only three (3) delegates and (3) alternates from the area that might be difficult. He did say that if he returns he would be okay with being an alternate and allowing others the delegate privilege. He said that having be active in the precinct, county, state, and now national conventions, he has gained insight into the work of the political party. He noted that the state convention has far more floor fights than does the national convention. He stated that setting rules and determining platform priorities is more regulated at the national level thanks to those who meet before the convention to hash out differences.

Wisenbaker was perhaps one of the more interviewed media darlings of the Texas delegation. He was interviewed by national and regional news media and met many of the nationally known names in news reporting. He said the media tried to bring up Cruz to Texas delegation but that the delegation gave effort to keeping the party message a priority.

Wisenbaker summed up the week by saying, “It was an interesting experience.”