From the Convention Floor: A Political Junkie’s Dream Comes True

Unity continues to be a common thread in the reports received from Hopkins County’s Donnie Wisenbaker, a delegate to the Republican National Convention this week. However, one of the dreams of his self-defined political junkie life came true Tuesday evening.

Tuesday evening, Wisenbaker was on the floor as Lt. Governor Dan Patrick voiced the vote of the Texas Delegation during the roll call vote for the Presidential nominee. Wisenbaker, a life-long Republican, said that for years as he has watched the roll call vote, he has wanted to be near the mic as the vote was given. He said he was about 5-feet from the Lt Governor. He also noted that the articulate Donald Trump, Jr was well received by the crowd. Wisenbaker said that it should be realized that with all his children speaking their confidence in and close relationship to their dad, Donald Trump, Sr. it says a lot about him as a good father and “that goes a long way”. 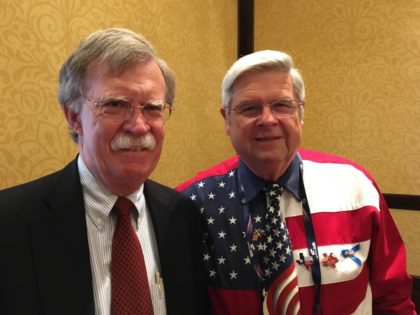 This morning the Texas caucus breakfast began at 8 a.m. and ended at 11 a.m. as Ambassador John Bolton and Lt. Governor Patrick addressed the group. At 11:15, the group met with Senator Ted Cruz. Cruz will address the convention tonight.  Wisenbaker expects Cruz to push his vision for America and to call for unity as the party moves forward in seeking the election of nominee Trump. Wisenbaker said the goal is to defeat the Democrats in the fall.