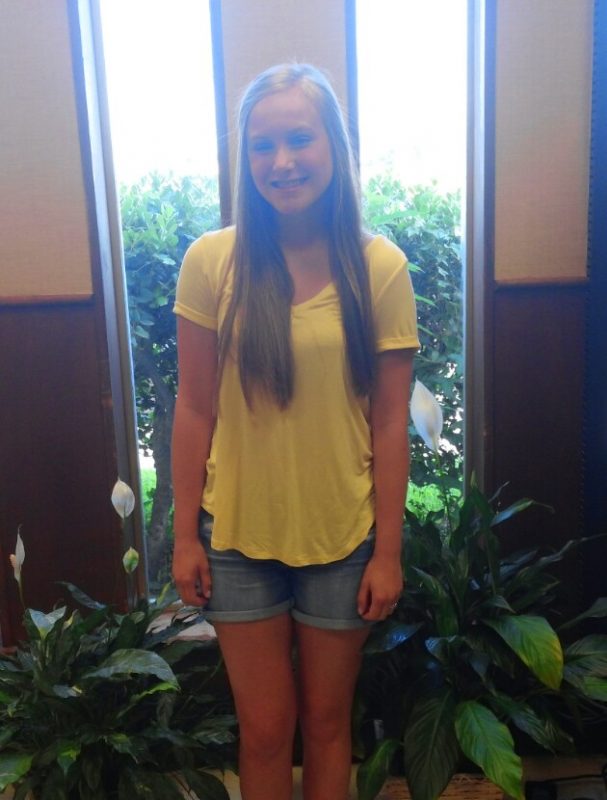 A year ago, this young lady was hopeful that she would be chosen to wear the crown of Hopkins County Dairy Festival Queen. Today, she is about to hand that crown over another young lady at the end of the 2016 Queen’s Pageant. And as all seventeen-year-olds do, Sidney has changed, grown and matured during her final year of high school, and has set some long-term goals for life.

Sidney is unique in that she held “dual titles” this Spring. She was Salutatorian of SSHS Class of 2016 while also representing the Dairy Festival and local dairy industry. Her ambition is to become a doctor. She begins classes at Baylor this Fall in Pre-Med, working towards a degree in Medical Humanities.  Her specialty may be in Cardiology, but time will tell as she is wisely taking this journey a step at a time! She’ll be heading for Waco in mid-August.

As Dairy Festival Queen, Sidney enjoyed the parades most of all. Riding on the Queen’s float with her parents towing it behind their truck, waving at the crowds and watching the kids scramble for candy are happy home-town experiences that she will treasure forever. Interaction with children amazes her, especially  when they look up and ask “Are you really a Queen?” She appreciates her friend 2005 Dairy Festival Queen Kate Watson Davis who has been a mentor. Sidney cherishes a day when she visited Mrs. Gideon’s first-grade class at Travis Elementary  School during story time because she got to hand out Dairy Museum gifts and chat with the students one-on-one. Her milking contest experience is also a good memory. She received coaching from Chris Koon, a local dairyman who also impressed on her the festival’s importance to the industry. Chris not only helped her learn to milk a cow, he enlightened her with the reasons why the cows in the barn are so vital to the lives of current and previous generations of families. The Interview with Judges portion of the Dairy Festival competition also impressed Sidney, and she feels that boosted her confidence for future job interviews. She also has enjoyed mentoring and encouraging this year’s contestants, especially through rehearsal week, bonding with the girls. Also a new Deitze  family tradition has begun, as Sidney says her sister plans to follow in her footsteps and enter the Queen’s Contest next year!

A couple more “firsts” for Sidney….the Queen’s float is brand-new and she was the first to ride on it, and the Civic Center auditorium is also “brand new” and Saturday’s Pageant is the first event to be held on that stage.

As Sidney leaves behind her crown and her hometown, we could echo the same advice she has given to this year’s contestants, “Just be yourself, do your best, and you’ll be fine!”