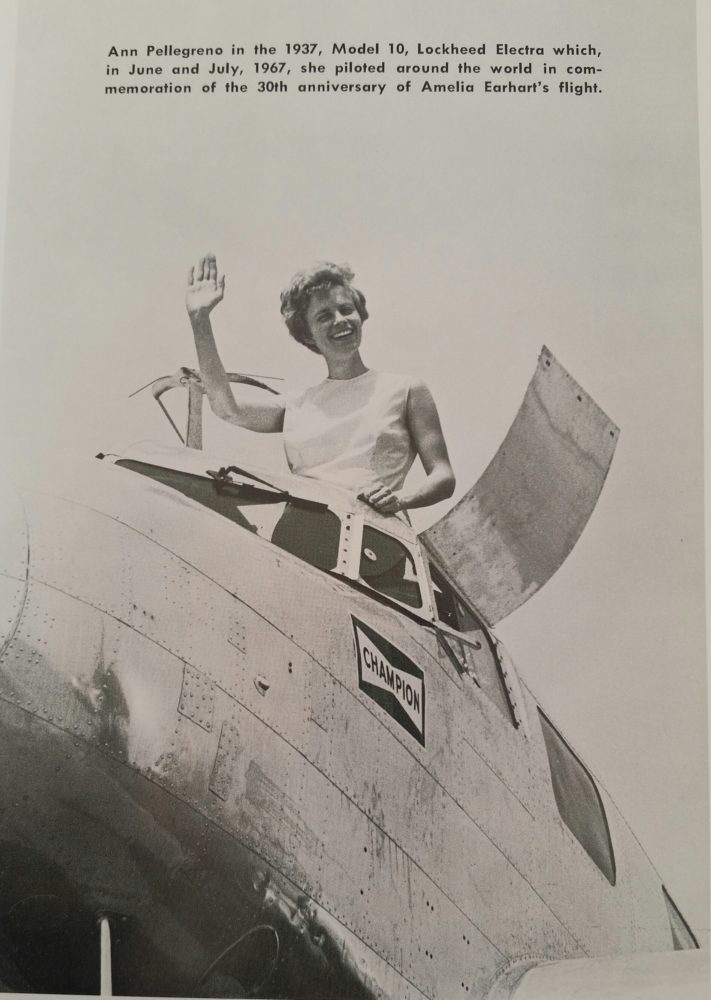 The twinkle in her eyes grows brighter as Ann Pellegreno recounts her 1967 experience of flying a Lockheed 10A Electra, around the world following closely the Amelia Earhart 1937 flight plan. Pellegreno was in Sulphur Springs to address those attending the Ladies Love Taildraggers Fly-in at the Municipal Airport Saturday, June 4, 2016. In 1967, Pellegreno flew around the world in commemoration of the 30th anniversary of Amelia Earhart’s flight. KSST News spoke with Pellegreno prior to her address of Ladies Love Taildraggers, a group of ladies from around the nation who love to fly and who seek to introduce women to the world of aviation. 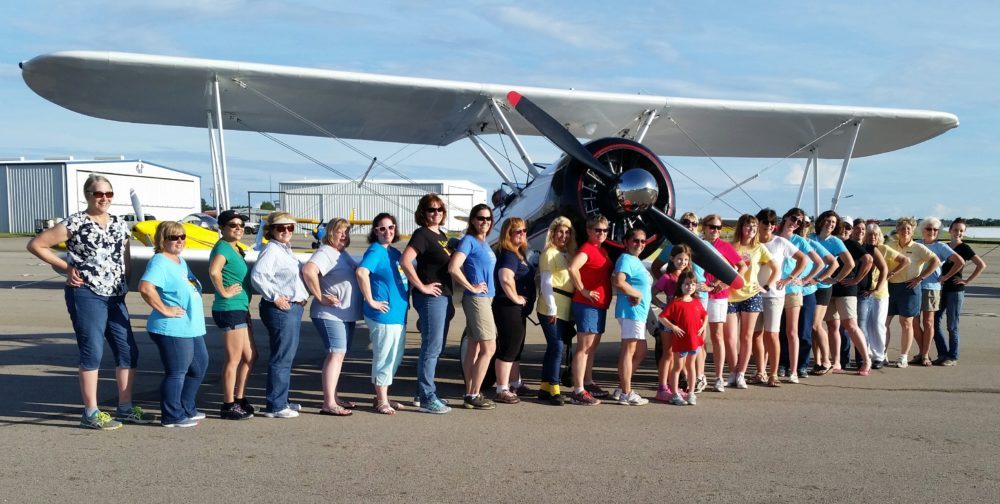 Pellegreno described her successful 28,000 mile world flight that took place on the 30th anniversary of Earhart’s disappearance. “It was very exciting, very adventurous, and something I had never planned to do.” Born in 1937 in Chicago, her life has been filled with variety as she has been not only an aviator but also a professional musician, teacher, author, lecturer, and farmer. She now delights in telling her story to others to encourage the adventure of flight.

Her crew for the flight, William Pohemus, navigator, Leo Koepke, aircraft owner and mechanic, and William Payne, copilot, were gathered over a period of five years. It began with Koepke, who had purchased the Lockheed 10 described by Pollegreno as “a relic, a wreck” but the same model twin-engine plane that Earhart had flown in her 1937 failed attempt to circle the world. Koepke restored the plane from 1962 to 1966.

In ’62, Koepke asked Pellegreno if she would like to fly around the world. Although her longest flight at that time had been from Ann Arbor, Michigan to Rockford, Illinois, her answer was “sure”. She was a flight instructor multi-engine rated. The two, with support of their spouses, began looking for support. It was hard to find. At that time the plane could only fly 1000 on the fuel tanks and the lack of international flight experience stood in the way. However, recruiting William “Bill” Pohemus increased their likelihood of funding. Pohemus secured a communication instrument that would allow the flight crew to communicate around the world. He also suggested they needed a navigator and was immediately added to the crew. Since the plane had no autopilot and Pellegreno had limited experience with great distance, the trio decided a co-pilot would be added to the crew. Pohemus suggested his friend Bill Payne. Payne had won a prestigious award for his recent flight from New York to Paris that had set a speed record. Pohemus had been Payne’s navigator.

With “two of the top flight guys in the world” and “a top-notch mechanic”, Pellegreno was set for the flight. With this crew, opportunities began to come their way. Having invested savings into the flight and now wondering where the additional funding would be found, those answers came in the form of corporate help. Goodyear gave a pair of balloon tires for the plane. Fuel tanks that would hold “more than a DC-3 carries” were added in Wichita, Kansas. A system was added to the nose section that would allow the crew to turn a crank 58 times to add one quart of oil to the engine as needed. Two sextons were added as well as other equipment. Space to do all the work was provided rent free.

Other organizations began to raise money for the adventure. Famed World War II Pilot Jimmy Doolittle was contacted and became involved. His organization provided an international credit card that could be used worldwide to make purchases as needed.  Pellegreno would not meet Doolittle until 1972 in New York City when she received the National Aeronautics and Space Administration award for best non-fiction book. Shell Oil reduced the fuel bill from $10,000 to $5,000. An article in McCall’s Magazine by Pellegreno provided the remaining $5,000. Champion Spark Plugs also provided needed equipment. Pellegreno stated that she worked for two years to pay for the flight.

The flight mirrored Earhart’s flight. On June 7, 1967 they flew to Oakland, California to begin the journey. On June 9th Pellegreno and crew flew east to Miami and then on to South America, and Africa. Due to the Arab-Israeli war, the State Department forced the crew to get new clearances. From Africa, they flew to the Canary Islands to Rome, Italy, to Turkey to Iran trying to follow the Earhart trial as closely as possible. From Iran to Singapore and then to a small island where a grass airstrip awaited. They landed just before sunset. Horses had to be chased off the runway before landing. There they refueled and had to pay those who hand-pumped the fuel $72 cash. From there to Australia and onto the last place Earhart had been seen. Refueling on the island of Nauru in the Pacific and spending the night there, the runway was checked for wild hogs and they were off again   they flew to Howland Island where they dropped a wreath. A few other stops and then back to Oakland before making a few other stops to visit with those who had been involved in the Earhart search.

The story of her experience is told in her book, World Flight the Earhart Trail. 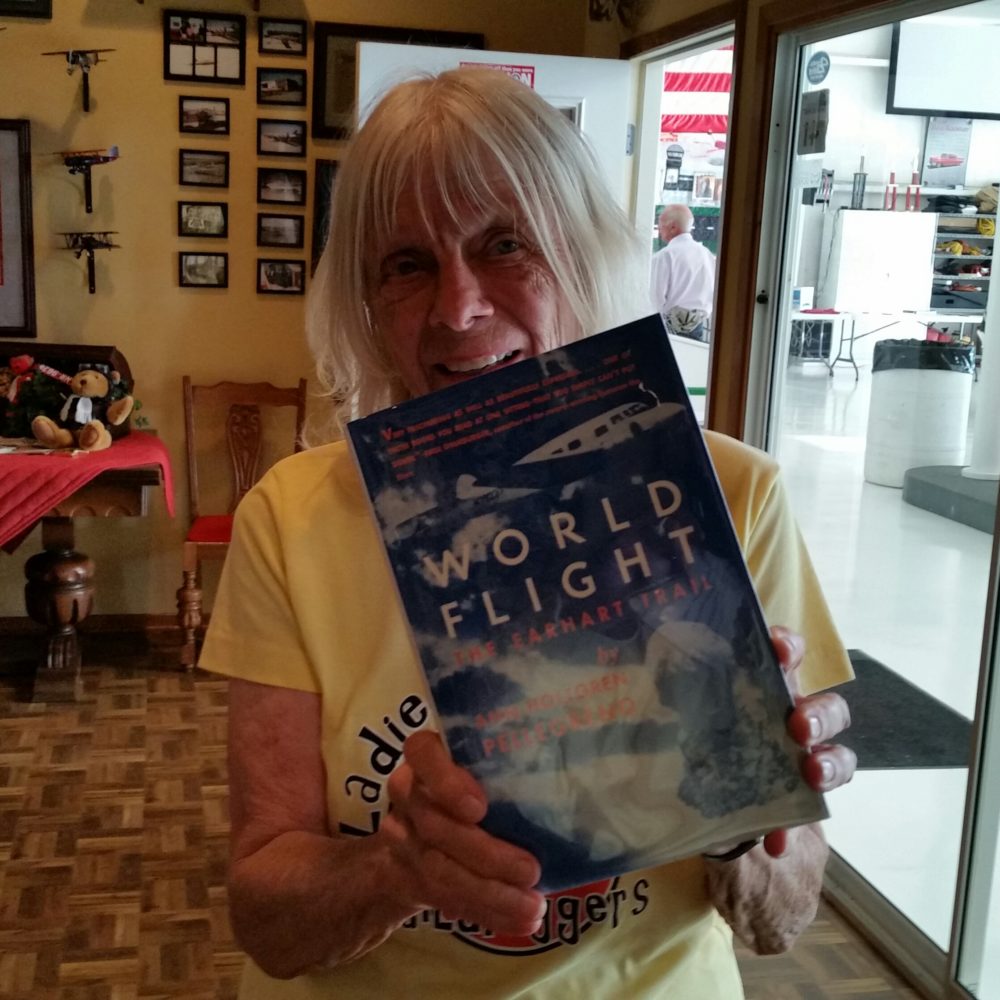