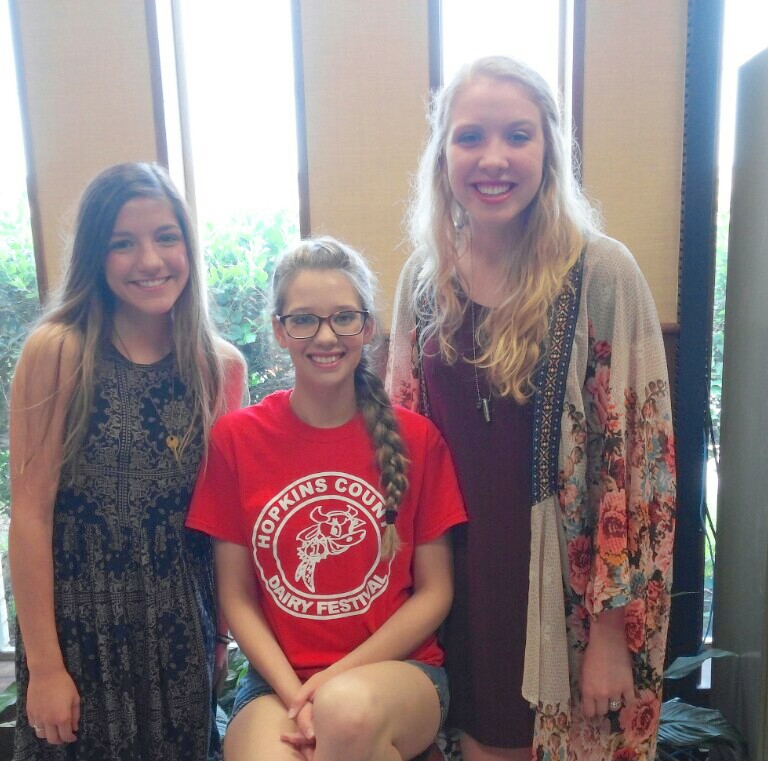 As their busiest week of preparation got started, three young ladies competing for the title of Dairy Festival Queen appeared on the Good Morning Show with Enola Gay. Contestants # 1,2 and 3 talked about their experiences with float building, cow milking and riding in the Parade, as well as putting the final touches on their talent presentations. Sadie Evans plans to sing “No Good Deed” from the musical “Wicked”, Lauren Helm will be signing to “Revelation Song” by Kari Jobe,  and Alexis Howard will perform a lyrical dance to “Garden” by the Christian rock band needtobreathe. All eight contestants will compete for the crown during the Queen’s Pageant on June 18, 2016 at 8pm in the newly-completed auditorium of the Hopkins County Regional Civic Center in Sulphur Springs, Texas.

Contestant # 1 Sadie Evans, age 17, is a 5’9″ blue-eyed blonde. She is the daughter of Jason and Angie Evans, and granddaughter of Roger and Rita Wright and Donnie and Pam Evans. During her career at Sulphur Springs High School, she has received the Rotary Youth Leadership Award and holds the offices of Student Body President, Parliamentarian of Class of 2017 and Secretary of Thespian Society. She is in National Honor Society, is the anchor for Dare to Dream and has been cast in leading roles in theatrical productions for the past 6 years. Sadie has been working with a vocal coach for two years and performs at Oprys, plays guitar, dances and writes songs. After high school, she plans to attend Belmont University in Nashville to earn a degree in Musical Performance and Songwriting. During the first weekend of Dairy Festival, Sadie won First Place in the Contestant Cow Milking Contest and attributes that to her family dairying background! If you notice the large Holstein cow statue in front of the Hopkins County Dairy Museum in Sulphur Springs, it was donated by Sadie’s great grandmother Dorothy Hinton and family in honor of her late great-grandfather Wayne Hinton, who was a dairy businessman in Hopkins County.

Contestant #2 Lauren Helm is age 17, is 5’3″ with brown eyes and brown hair. She is the daughter of Jonas and Melanie Helm. She enjoys off-road racing with her dad, running, playing soccer, babysitting and helping with a Special Education class. This summer she plans to go on Mission trips to Austin, Texas and to Costa Rica. After high school, she wants to go to college and major in Psychology to become a children’s counselor. She is active at First Baptist Church and attends Sulphur Springs High School.  Her activities in school include National Honor Society and Key Club. She was named Academic Athlete, Varsity Soccer team Captain, soccer MVP, cross-country MVP, and 2nd team cross-country All-District. Lauren placed second in cow-milking after a tie with another contestant, which resulted in a milk-off!

Contestant #3 Alexis Howard, age 16,  is 5’4″, has green eyes and brown hair. She is the daughter of Genny and Michael Howard, and is a Sulphur Springs High School senior. She has been in dance instruction since age 2 and loves to perform ballet, tap, jazz and hiphop. Her dance instructor is Kristen Lewis of the Ardis Centre for Dance. In high school, she is a National Honor Society member and enjoys art classes. She is active with The Way Bible Church. Alexis plans a nursing career. She would like to become an RN like her mom and work with children and teens with cancer.

All the 2016 contestants are students at Sulphur Springs High School, and are going into their senior year. The Dairy Festival Queen tradition begin in Hopkins County in 1959.