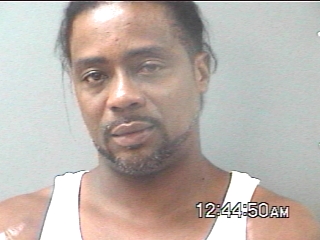 Kelvin Dionn Harrison, 47, of Sulphur Springs was arrested Wednesday morning by Special Crimes Unit Detective Sergeant Tony Crouse on three charges. A caller, who asked to remain anonymous, informed Sgt. Crouse of suspicious activity taking place at an East Beckham Street residence. During an investigation of the property, Sgt. Crouse noticed from the street that marijuana plants were being grown outside the residence in plain view allowing for a probable cause search of the home to be conducted at which time it was discovered that Harrison was also growing marijuana inside the hot water heater closet. Sgt. Crouse also located cocaine above a kitchen cabinet as well as a gun that was stolen during a previous burglary in Hopkins County. Harrison was then taken into custody and transported to the Hopkins County Jail where he now sits on $27,000 total bond: $15,000 for a 3rd degree felony Possession of a Controlled Substance less than 1 gram in a Drug Free Zone, $10,000 for Possession of Marijuana less than 2 ounces in a Drug Free Zone, and $2,000 for a State Jail felony Theft of a Firearm.