How Do Local Students Feel About Obama’s “Bathroom Decree”? 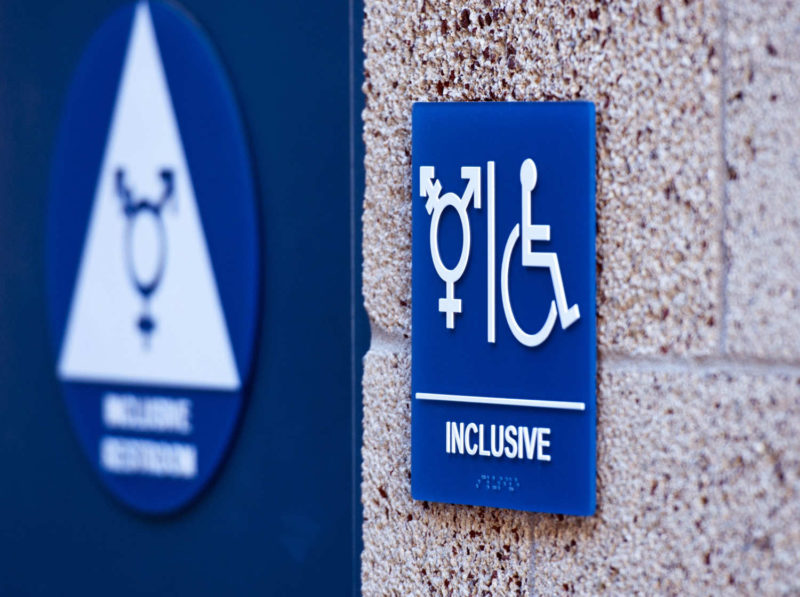 On Friday, May 13, 2016, the Obama Administration sent out a decree for all public schools in the nation. The decree stated that all public schools must allow transgender students to use the bathroom they identify with or lose federal funding. On average, the nation’s K-12 school districts receive around 10% of all their funding from the federal government. The decree won’t just impact funding for K-12 public school districts though, if a college or university is labeled non-compliant those students are in danger of not being able to use their awarded grants or loans at that specific school. The guidance letter itself does not state the extent the government will go to if a district or school does not comply, but it is projected that most colleges and universities won’t wait to find out.

While the decree has been steeped in controversy by most adults, KSST News wanted to hear from the students themselves on their take of the “Bathroom Decree”. In interviews with a total of eight students, all from different backgrounds, genders, and grade levels, they were asked the same four questions with a only one individual present after a quick reminder of what the joint letter was, when it was sent out, and the consequences that would follow if a state or district did not comply.

In favor of the “Bathroom Decree”:

Three of the students that were interviewed were completely in favor of the “Bathroom Decree”. “I have always been sort of pro-LGBT. I’ve never understood any anti-LGBT rhetoric or anything. I think if they cut federal funding because the school tries to tell someone who is transgender that they can’t use the bathroom they identify with then they deserve it. If it helps teach a lesson to those trying to stop it, I’m okay with funding being cut,” stated a male, freshman.

After asked her opinion, a female senior stated, “I think it’s fine. I think that everybody should be able to use the bathroom they’re comfortable with. I have a lot of friends who are gender binary, transgender, it’s never bothered me. I feel like if funding needs to be cut then that’s what needs to be done. They had to do that during the Civil Rights Movement so it is what it is. If people didn’t get the message beforehand they should get it now. I don’t feel like there’s anything else you can do, it mostly affects young students, young people, who are transgender. There are people getting hurt because of this. I have a friend, who I’ll leave nameless, but he’s afraid to go into the bathroom that he’s comfortable with because of the fear of being assaulted so yeah, I’d do the same thing the President has done.”

Not in favor of the “Bathroom Decree”:

Three of the other students interviewed disagreed with the “Bathroom Decree”. A male junior weighed in with, “I feel like if you don’t have those specific body parts, you shouldn’t be allowed to go into that restroom. It just makes sense, like it’s not right. I feel like cutting federal funding is forcing it on people, you don’t have a choice in it anymore. I mean you do, but if they don’t like your choice then you’re getting punished for it. It’s an issue but the government is taking the wrong side.”

A female junior said, “I don’t agree with the letter. I think it should be more on a state to state basis than the President just ordering something like this. If funding is cut there’ll definitely be damage done, it’ll be controversial of course. Everyone deserves happiness, everyone deserves to be treated equal but when other people feel uncomfortable then there’s the problem.”

A female sophomore replied, “I don’t agree with letting the transgenders go into the school restrooms. I feel like it’s uncomfortable for not only me, but others. I wouldn’t do something like this. I would make a bathroom for transgenders, for their comfort and for ours. People have different views, this whole thing is unfair to those who agree with it and to those who don’t.”

The last two students interviewed proposed ideas that didn’t oppose the idea of equality or government intervention, but they didn’t agree with the consequence of federal funding for education being cut. A male freshman proposed, “When it comes to transgender access to school restrooms I personally believe that all transgenders have the right to use the bathrooms they identify with but, the way the letter has been presented is a little rash because the students impacted can’t control what the government chooses to do with transgender rights. Even though I believe they all deserve rights, we all know there are a lot of ways this could go against us and effect our education if we aren’t careful in how we implement this. Sure, Obama’s intention’s are good but he should be a little more careful in how it’s implemented. I don’t know what I would do in his shoes because I believe we should fight for transgender rights but, I don’t know that cutting federal funding is the best way to go about it.”

The last student interviewed, a male senior, touched on a few aspects that most did not. “This shouldn’t have been an issue. Not in the sense that it wasn’t an issue to begin with, but that making bathrooms gender neutral shouldn’t have been an issue. Overall, it really doesn’t change that much. A lot of people say that it just opens up more windows for assaults in bathrooms, but assaults in bathrooms were already happening. It doesn’t really make bathrooms safer but it doesn’t make them anymore at risk, it’ll just change who you see in the bathroom. I can definitely see why some people would be concerned if they have younger children or wives and the possibility of them being attacked by people who are pretending to be transgender but there’s always that risk. You are never guaranteed one hundred percent safety in life. In the recent cases of assault that have happened since the transgender bathroom bill has been put in place it hasn’t been perpetrated by transgender people, it has been perpetrated against transgender people. If you read the news, you hear some Republican leaders say that ten billion dollars is not something that Texas can afford. This is something Texas Republicans should take very seriously. Issues with education are already rough enough as it is and if we lose ten billion dollars that’ll be devastating. What I would do is focus on the language of how we address this issue, I think one of the reasons this didn’t have a flawless execution is because of the language the government chose when framing it. By saying ‘gender neutral’, ‘trans-positive’, or ‘trans-friendly’, they throw around this language that is foreign to Republicans and sorta makes them uncomfortable and alienated from the whole situation. The best way to do it would rebrand this just as ‘bathrooms’. If you want to have still boy and girl bathrooms and then a gender neutral bathroom just labeled as ‘bathroom’ I think that’ll be fine just as long as you avoid these big words that make people uncomfortable. There’s always people using good changes for their own bad purposes, that’s always been true.”

After a total of eight interviews, a wide spectrum of beliefs were presented and reminded us why freedom of speech in the United States is so great.