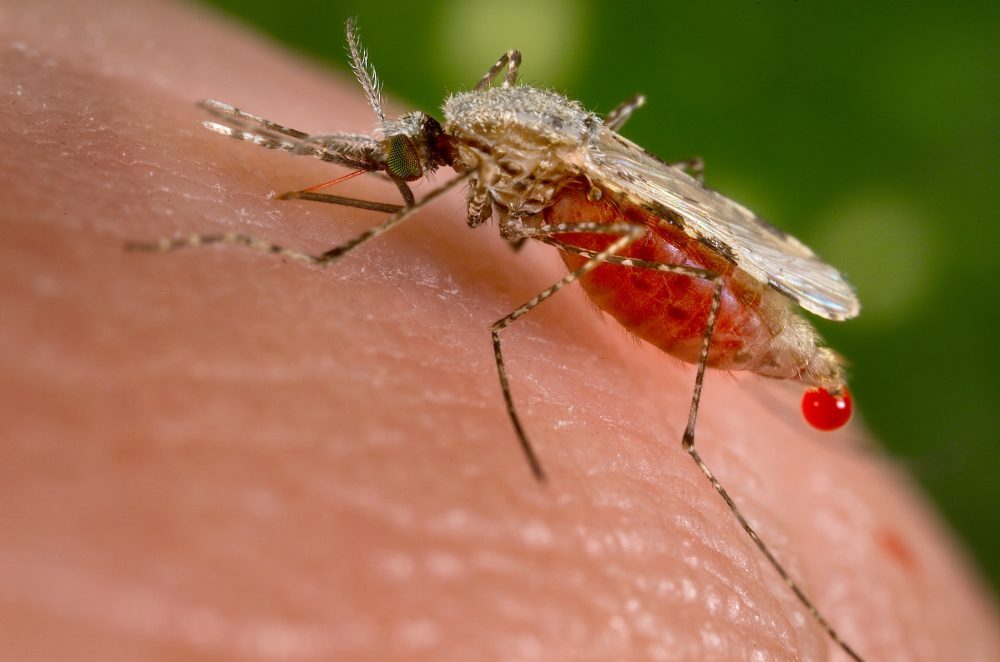 Here an Anopheles stephensi female is gorged with blood and beginning to pass unwanted liquid fractions of the blood to make room in her gut for more of the solid nutrients. “Anopheles stephensi” by Jim Gathany

Texas A&M AgriLife Extension Service entomologists are informing Texans on how to protect themselves from the mosquito vectors that spread Zika and other diseases.

“The ongoing outbreak of the Zika virus has spread throughout most of South America, Central America and the Caribbean,” said Sonja Swiger, AgriLife Extension entomologist, Stephenville. “The effects this virus will have on the United States are not entirely known, but experts are concerned about the possibilities.”

According to health officials, more than 350 travel-associated cases of Zika have been confirmed in the U.S., with 27 to date being in Texas. All of these cases occurred when the affected individual traveled to an endemic location and was bitten by an infected mosquito.

“The primary means of contracting Zika virus is through the bite of an infected mosquito, but it can also be transmitted sexually through semen,” Swiger noted.

The Centers for Disease Control and Prevention officially confirmed Zika virus as the cause of the increased cases of microcephaly in newborns that have been occurring in Brazil and other countries since fall 2015.

“Microcephaly is a condition affecting unborn children where the baby’s head is much smaller than expected,” said Swiger, who recently coordinated the North Texas Mosquito Education Conference in Grapevine and is conducting workshops throughout Texas.

“This occurs due to the decreased development of the baby’s brain while infected with the virus. Microcephaly can occur under other conditions but a significant increase of cases has been seen in Brazil since fall of 2015 and new cases are now being reported in Colombia.”

Swiger said the CDC is instructing pregnant women or women who plan to become pregnant to not travel to endemic outbreak areas at this time. The CDC’s website also has tips for men who plan to visit endemic areas at http://wwwnc.cdc.gov/travel/page/zika-travel-information.

“Thus far, Zika is not here in the Texas mosquito populations, but what the future holds for Zika in the U.S. is not entirely known,” Swiger said.

Previous diseases have entered the U.S. by means of travelers bringing them in, but have failed to infect the local mosquito populations long term, she said.

“Health professionals have established a strong connection between the Zika virus and Guillain-Barré syndrome and microcephaly, as well as an autoimmune disease with neurological symptoms similar to multiple sclerosis,” Keck said. “And while media reports tend to emphasize the risk to pregnant women, the virus holds potential dangers for people of all ages.”

Houston, Dallas, San Antonio and Brownsville have been identified by the National Center for Atmospheric Research as some of the highest-risk cities in Texas for Zika. According to public health officials, if it does enter Texas it will likely begin as small “pockets” of locally acquired human cases that are the result of infected travelers returning from countries where the disease is endemic.

“Currently the chances are slim for anyone in Texas to get a disease such as Zika or chikungunya, but there is a possibility these could become endemic through transmission by the Aedes aegypti, which is prevalent in this state,” Keck said.

She explained chikungunya was recently brought to the U.S. by travelers returning from places where the disease is endemic. Its symptoms include fever and joint pain, headache, muscle pain and swelling.

Keck also noted the hundreds of cases of another mosquito-borne disease — West Nile virus — in Texas during recent years. According to the Centers for Disease Control and Prevention, in 2013 there were 183 human cases of West Nile in Texas. In 2014, there were 379 cases, and in 2015 there were 252 cases.

“The common denominator in each of these diseases is there is a mosquito vector that transmits them,” she said.

The Ds are to dress in long, loose-fitting, light-colored pants and shirts; drain any standing water from containers, ponds, tires, gutters, etc. around the home; reduce outdoor activity during dusk and dawn;  and defend using a U.S. Environmental Protection Agency or CDC-approved insect repellent.

Keck recommended homeowners “attack the mosquitoes at the larval stage” by removing standing water and using mosquito dunks in areas where they might breed.

“Homeowners should apply their efforts to draining and removing the items that might make for a good mosquito breeding ground and/or putting mosquito dunks into any pools of standing or stagnant water,” she said. “A mosquito dunk is a small, brown donut-looking object that floats on water and slowly dissolves, releasing a bacterium that kills mosquito larvae.”

Keck said generally it’s a waste of time, money and effort for the average homeowner to try and control mosquitoes at the adult stage.

“The best you can do when they’re at the adult stage is try to avoid them. If that’s not practical, be sure to wear a good repellent when outdoors.”

Additional information on Zika can be found at these websites of the Texas A&M University System: http://preventingzika.org and https://vitalrecord.tamhsc.edu/zika360.

For more information about mosquito types, biology and control, go to http://mosquitosafari.tamu.edu/.