I guess the biggest news I have this week is the groundbreaking ceremony for the new Miller Grove Elementary addition.  Of course with all of the rain in the forcast everyone was worried that it wouldn’t be dry enough to conduct any type of ceremony outside, but good fortune prevailed and the weather couldn’t have been better. 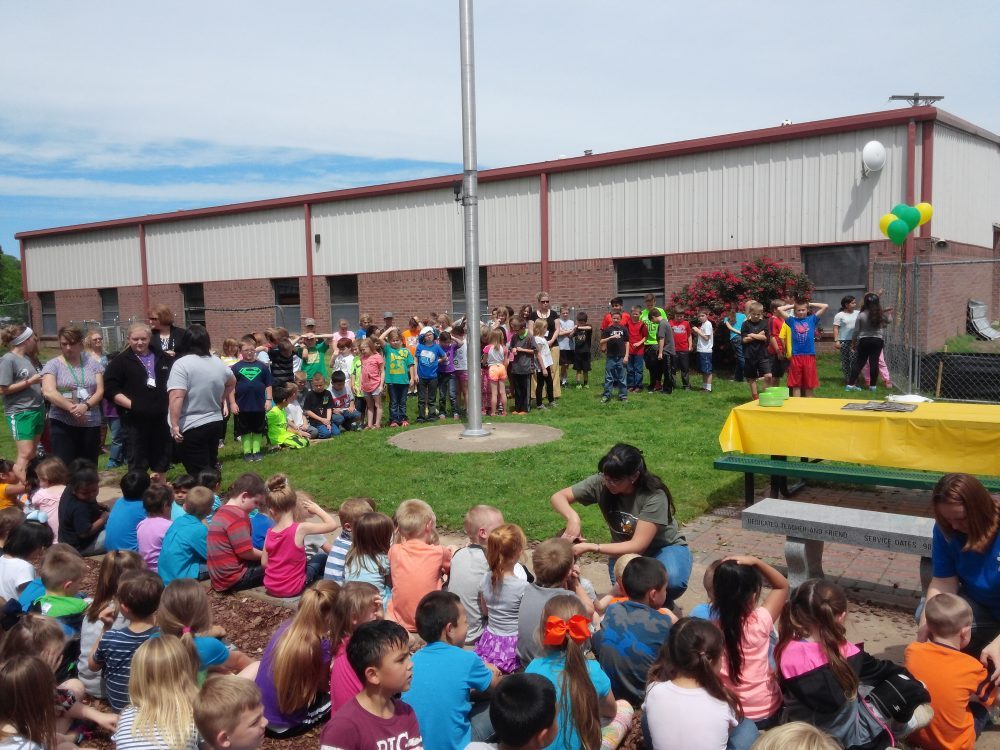 People began to gather in the front yard of the school around 11:45 am.  By noon there was a nice crowd that had formed.  Several notables were there.  We had Dan Flynn (State Representative), Robert Newsome (County Judge), Meredith Caddell (Hopkins County Chamber of Commerce), and Beth Wisenbaker (Hopkins County Precinct 1 Commissioner) on site for the ceremony.  Of course the media was there – Enola Gay Matthews (KSST Radio), Bobby McDonald (Front Porch News), and Kay Thompson (Rains County Leader).  We had quite a few students and faculty on the scene to help usher in the construction site.  We were very fortunate to have 3 special Miller Grove Alumni on hand to help us shovel our way to success.  The Alumni I am speaking of were Hollis Garmon (1938 MG Graduate), Olivia Mahand Manning (1939 MG Graduate), and Thelya White Bone (1936 MG Graduate) – our eldest graduates who lived in the area that could come out and enjoy the day.

MGISD Superintendent, Steve Johnson, welcomed the crowd of onlookers and announced how proud he was of the new elementary addition that was forthcoming.  He also let everyone know how carefully things had been planned to make sure the financial stability of the district was still going to be intact while adding a building to the campus makeup.  He then turned the floor over to Jaime Fox, Elementary Principal and 1994 graduate, who relayed that she went to school for a time in the portable buildings that had been recently been moved so that construction on the elementary could begin.

School Board Trustees were recognized and asked to make their way in front of the audience.  Mrs. Fox asked that each board member say their name followed by the year they graduated from Miller Grove; if they graduated from our school.  All board members were present and were as follows:  Doug Hall (1985), myself (2001), Brian Lennon (1983), Bret Garrett (1984), Kristi Burnett, Eric Mabe (1982) and Lewis Russell (1971).

I had the honor of being asked to announce our three special guests for the day.  Hollis Garmon was first in line and was introduced as being a previous educator and later a judge but foremost a MGHS graduate.  The next graduate that I recognized was Olivia Manning who was wearing the first school ring that was ever handed out at Miller Grove, in 1939.  Finally I had the privilege of calling on my good friend, Thelya Bone, who graduated from MG in 1936.

Then Mrs. Fox asked the teacher with the longest tenure at the district to come forward.  Mrs. Ginger (Harris) McCreight has taught at Miller Grove since 1988, making this her 28th year of service in the district.

With hardhats on and shovels in hand the board members, the 3 alumni, principal, superintendent and Mrs. McCreight all posed for photos with the backdrop of rough ground that will soon be a concrete pad and foundation for the new school.  Looking behind us, there was also the machinery that would soon be making this construction reality.

Cake was served to everyone from IdziBitzi Bakery in Sulphur Springs.  There was enough for all guests and students to get a taste of the culinary confection.  This day was also special for Mrs. Manning, being her 95th birthday.  Students lead us all in singing Happy Birthday to her.

As things settled down several reminisced about days gone by at Miller Grove School.  Hollis Garmon mentioned the school busses they had to ride – much like an old pickup truck.  Olivia remembered playing for 2 years with the girl’s basketball team that went to state.  Thelya told of how she went to school in the two-story wooden school house and how different things were for students in these days.  By 1:00 pm the guests were slowly drifting away and the ceremony disbanded.  The day was a success and everyone seemed to enjoy themselves – especially our honored alumni guests.

Happy Birthday this week to Lethia Ferguson on Apr. 24, Derick Petty and my niece Savanna Darrow on Apr. 25, Fred Moseley Jr on Apr. 28, and Natalie Darrow & Dwayne Wren on Apr. 29.

Remember Saturday, May 7, as the day of Miller Grove FFA’s Stew & Auction as well as the Miller Grove Cemetery Memorial Day.  More information on those events as they get closer.