It was a night of unique moments during the award presentations at the 90th Annual Hopkins County Chamber of Commerce Membership Banquet Thursday night at the Hopkins County Regional Civic Center. A second generation winner of Citizen of the Year, one receiving two awards, and an award given posthumously to parents and to the son and his wife who currently own and operate the business were all a part of the evening. 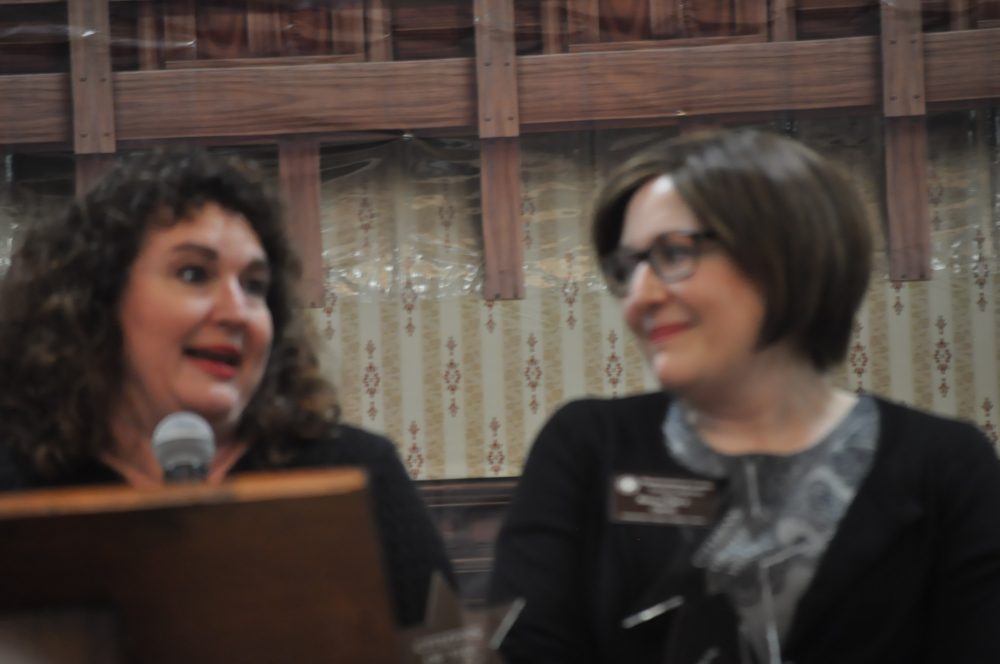 The Pilot Club’s Caregiver of the Year was presented by Beverly Owens, member of the Pilot Club for 20 years, to Jan Worsham. Ms. Worsham has retired from her job to care for her son who suffered a severe injury that caused brain damage. According to Mrs. Owens, Jan spends hours researching therapy, medications, and various avenues that will create a better life for her son. She enrolls him in brain care camps and enrolls with him. Mrs. Owens says the motto of the Pilot Club is to do more, care more, and be more and that Jan Worsham embodies that motto. The Pilot Club seeks to serve the community and those with brain disorders.

The Downtown Business Alliance Growth and Renewal award was presented to the Sulphur Springs Symphony League for all they do. Noting the Symphony Leagues’ involvement in providing the Independence Day concert on Celebration Plaza, the children’s concert for students and the Dallas Opera traveling troupe; she stated that the league enhances life in the community. She also noted the League’s fundraiser, the Radio and TV auction.

The 2015 Ambassador of the Year is Debroah Huffman.

Educator of the Year awards were presented to Paraprofessional Sharon Cox, Sulphur Bluff ISD; Teacher of the Year, Johnny Wells who taught 31 years and since 1983, a teacher at Sulphur Springs Middle School; Educator of the Year Non-Professional: Kenneth Cochran, maintenance supervisor for North Hopkins who drives bus, is grounds care taker for sports fields and school property; and Educator of the Year: In memory of Judy Tipping and Pamela Clayton, retired from the SSISD who now teaches at PJC.

Sponsored by Chamber Workforce Committee, the Small Business of the Year is NorTex Tractors and manager Shawn Massey. NorTex was recognized for their sponsorships of recreational sports, DARE, and other community and charitable organizations. NorTex employs 18. Massey was recognized for lending tractors and equipment to farmers in distress and for going above and beyond in helping employees in need. Massey is a life-long resident of Hopkins County.

The Large Business of the Year is Sulphur Springs Livestock and Dairy Auction, Joe Don Pogue and David Fowler, owners.

Chamber Board of Directors honored the Book Worm Book Box with the Vision Award. The Book Worm Box has donated over $300,000 to charity (see separate story).